Snowden Wants To Face U.S. Trial - But He Has Conditions 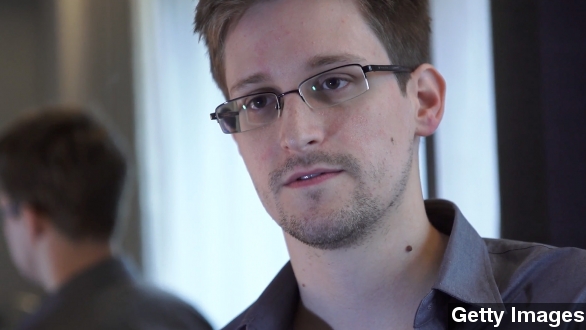 Edward Snowden is working to return to the U.S., according to his lawyer — but only if the U.S. government guarantees him a fair trial. (Video via The Guardian)

Lawyer Anatoly Kucherena told reporters Tuesday that Snowden has a team of lawyers working to bring him home but isn't satisfied with U.S. Attorney General Eric Holder's pledge that he would not face the death penalty. (Video via YAYnews)

That pledge was made shortly after Snowden fled to Russia, but Kucherena points out Holder has no direct influence on court decisions.

Snowden's legal team also has a particular definition of a "fair trial." He's been charged under the Espionage Act, and his lawyers say as long as those charges remain, he wouldn't be able to defend himself in court, meaning a "fair trial" is impossible.

The World War I-era law imposes stiff penalties, including, possibly, death, on anyone who shares "information relating to the national defense" with an enemy of the U.S. (Video via Voice of America)

Snowden's lawyers argue the act would prevent him from telling the court why he broke the law and that it has no protections for whistleblowers, claims PolitiFact rated as true last year. (Video via The New Yorker)

Snowden wanting to return to the U.S. isn't new. He's said several times that he would be willing to return to face the U.S. justice system if he could get an open trial and was allowed to make his case to a jury.

One of his advisers even remarked Tuesday that Snowden would be happy with the kind of deal David Petraeus got. The retired general and former CIA head pleaded guilty Tuesday to giving his mistress access to classified information. He'll get probation and a fine.

But if his lawyers really are actively working to bring him home, that's a new detail. And since the U.S. hasn't changed its position, that's left journalists wondering what's changed. (Video via The Guardian)

"It might just be an issue that Snowden is getting tired of sitting in Russia. This is something that the government is not going to change on. They're not going to remove these charges," CNN's Evan Perez said.

Even though he's been out of the country, Snowden has never really dropped out of sight. Last month, a documentary film about him, "Citizenfour," won an Oscar for best documentary feature.

And a biopic is set for release in December, starring Joseph Gordon-Levitt as the fugitive whistleblower. (Video via AMC Theatres)