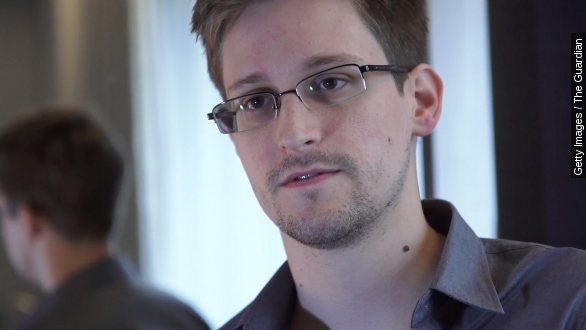 SMS
Snowden Returns To Spotlight In 2 Wildly Different Ways
By Ben Lawson
By Ben Lawson
April 6, 2015
The day after Edward Snowden's penis-joke-filled interview with John Oliver, the NSA leaker got a solemn, less-than-legal memorial in a Brooklyn park.
SHOW TRANSCRIPT

Edward Snowden, the former contractor behind the NSA surveillance leaks, was brought back into the spotlight this week in two very different ways.

First, a solemn tribute. A team of anonymous artists in Brooklyn placed this bust of Snowden on top of an existing Revolutionary War memorial. The group explained to Animal New York that they wanted to honor Snowden and the risks he took to expose NSA surveillance. The 4-foot-tall statue was added without permission by the city and was removed Monday afternoon.

"You can rip the statue out but you can't erase the fact that it happened and that people are sharing it and that it could inspire people to speak up in their own creative ways," said one of the artists involved in project.

The artists said they used an adhesive that would not damage the existing statue when it was removed. The New York City Police Department is investigating the incident.

Then there was Snowden's much less solemn TV appearance Sunday night.

"How much do you miss America? ... Do you miss hot pockets?" asked John Oliver.

HBO's John Oliver managed to lock down an interview with Snowden for Sunday's episode of "Last Week Tonight," and in Oliver's typical fashion, the interview toed the line between serious and ridiculous.

"You mention in an interview that the NSA was passing around naked photos of people," Oliver said

"When your junk was passed through Gmail, the NSA caught a copy of that," Snowden said.

Yeah, Oliver's interview bordered on absurd at times with a big chunk of it dedicated to jokes about the NSA rifling through nude photos of people.

But, as The Washington Post, points out, "By putting the NSA debate in terms, however ridiculous, people can understand, Oliver revived it. At least for 24 hours."