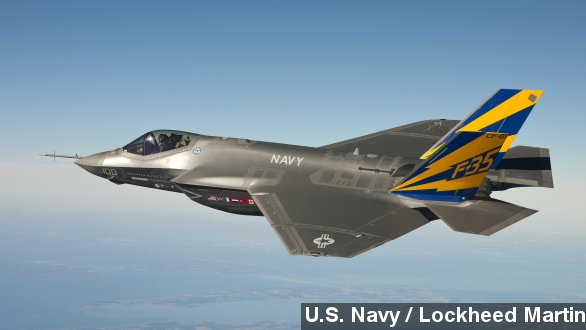 China is rejecting claims that it stole designs for the most expensive fighter jet ever made. (Video via Royal Australian Air Force)

A spokesperson for the Chinese Foreign Ministry called the accusations "baseless" in a press conference Monday, saying China is willing to work with all countries to ensure cybersecurity.

Although reports of hacks on the F-35 program go back to 2007, the documents published Saturday specifically label China as the culprit.

The documents also note more than 500 "significant intrusions" into the Department of Defense's systems, despite officials in 2009 denying that any sensitive information had been stolen. (Video via CBS)

Among the data reportedly stolen: designs for the F-35 and details about the jet's radar systems as well as flight diagnostics. (Video via U.S. Department of Defense)

Although the documents Der Spiegel published cover a wide range of cybersecurity topics, the documents relating to the F-35 are particularly notable, given China's recent advancements in the field of aeronautics.

China unveiled the Shenyang J-31 fighter jet at the Zhuhai international air show in November, and it's drawn a lot of negative attention for its resemblance to the F-35. (Video via QQ / Tencent)

A senior fighter pilot told the U.S. Naval Institute News the J-31 could soon be on par with the F-35, adding, "They should be because industrial espionage is alive and well."

The U.S. isn't the only nation affected by alleged hacks. Manufacturer Lockheed Martin also supplied F-35s to Australia, Canada, Turkey and others. (Video via Lockheed Martin)

U.S. officials have yet to comment on the published documents.