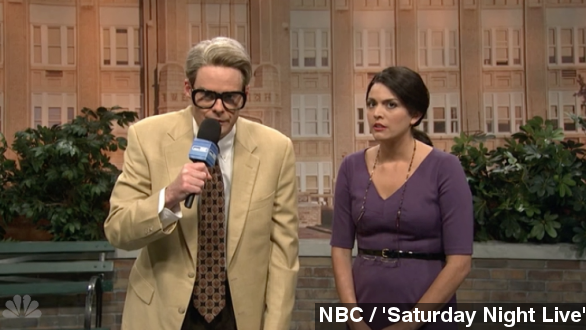 Bill Hader played some of "Saturday Night Live"'s most beloved characters, did some of its best impressions, but as host, brought the show its lowest ratings ever, tied only with Charlize Theron's episode in May.

Big cheers from the studio crowd, but Hader's Oct. 11 episode of "SNL" did not reach audiences at home. So what's the problem here? Lots of people are pointing to "SNL"'s cast turnover as the reason for low ratings.

Including Deadline, which reported the news of Hader's all-time-low episode. The outlet said "SNL" "has not been able to recover from the cast exodus."

Yes, "SNL" lost Kristen Wiig and Andy Samberg in 2012; Fred Armisen, Jason Sudeikis and Bill Hader in 2013; and Seth Meyers earlier this year. But if the show's low ratings are about losing favorites, wouldn't people tune in to see them?

Andy Samberg hosted last season's finale, and ratings were also reported as "down."

In May of 2013 host Kristen Wiig gave what was reported as only a "small" uptick to the show's viewership.

Or the A-listers. Chris Pratt, fresh off summer's huge hit "Guardians of the Galaxy," couldn't bring a strong season premiere in September.

Last season was supposed to be "SNL"'s rebuilding year. But what has it rebuilt?

In December, during this "rebuilding" season, The Washington Post's Hank Stuever brought up two key points, that "'Saturday Night Live' spends far too much of its time now being self-referential and nostalgic" and it has a "puzzling dependence on old premises" like talk shows and game shows for sketches.

Maybe. But look — Hader's episode was good. The Hollywood Reporter said it "had everything" — a "success." He brought back his funniest characters, like Stefon and reporter Herb Welch.

"Ask him how many students are involved in taking the pledge."

"I don't take orders from mannequins."

TV ratings are down in general. This is nothing new. People watch online on their own time. And TV Overmind asks the question that might be a little scary to hear out loud: "Is the era of SNL finally starting to come to an end?"

A huge part of "SNL"'s charm is that it's live. Isn't the best part of a sketch with Stefon seeing Bill Hader lose it? Even if you watch the clip the next day, you want to see him breaking character as part of it.

So, "SNL" might need a major rethink of its delivery and its its platforms.

Or, the media will have to reconsider how it defines 'low' ratings.

Truly, the show hasn't undergone a major revitalization since Samberg and his Lonely Island boys started doing digital shorts in 2005, almost 10 years ago.

Look NBC, we've got questions, not answers. That's your job.