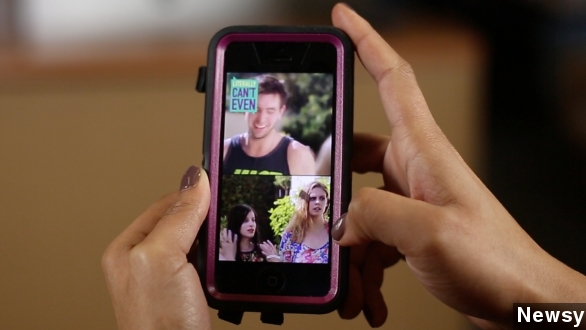 The four-and-a-half-minute video is available on Snap Channel, which can be accessed through Snapchat's new feature "Discover." The series comes from writers Sasha Spielberg and Emily Goldwyn.

Yes, that Spielberg and that Goldwyn. The two ladies also star in the show.

If you want to see the flick here's how: once you're logged into Snapchat just slide on over to Discover and Snap Channel is right here in the middle.

And, in case you didn't know, Spielberg and Goldwyn are already pretty hilarious.

The Hollywood Reporter explains the show is set in Los Angles where the real-life friends play "comedic versions of themselves — Spielberg recently single after a long relationship and Goldwyn embarking on a six-month cleanse."

A writer for Gizmodo was unimpressed by the debut, to say the least. Writing in this, um, blunt critique: "It's like ... two filthy rich adult babies from L.A. who decided to do a remake with more of an Entourage-y vibe, but shorter, and on your phone, and bad."

Yeah, The Next Web didn't really have anything nice to say either — blaming the cliche writing and basically saying it tried way too hard to be cool.

But with the majority of Snapchat users being teens, usually women 13 to 25 years old, this could be just what Snapchat needs to add that extra dimension and move away from that whole sexting app persona.

Although it's still pretty early to tell what the series could mean for Snapchat, the sharing service's ability to create content is being compared to popular original content producers like Netflix and Hulu.

As for as the critics who really matter — you know, Snapchat users — the reactions were pretty mixed. Ranging from "hilarious," to "pretty dope," there were also a lot of compliments when it came to the shots used in the show.

If you want to form your own opinion on the Snap show, you better act quick. In true Snapchat fashion, the first episode will diappear Saturday evening, 24 hours after its release.