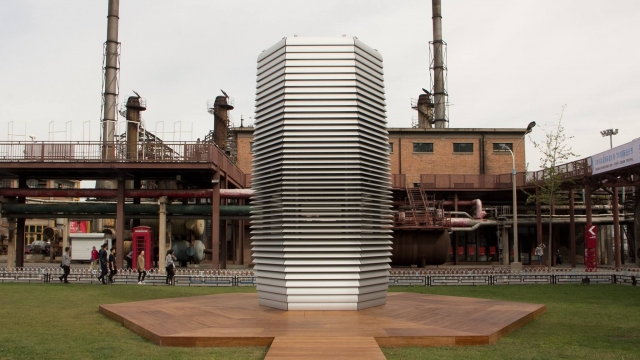 You've probably heard of jewelry made from diamonds and pearls, or maybe even human ashes. But now, you can purchase a ring made from China's smog.

Dutch artist Daan Roosegaarde and his team have unveiled what they say is the world's largest outdoor smog tower. It's in Beijing, China. The nearly 23-foot-tall building creates rings and cuff links from pollution.

The tower sucks in dirty air, captures smog particles and compresses those particles into smog-free cubes that can be made into jewelry.

The project started in the Netherlands last year. It was crowdfunded on Kickstarter and raised over $126,000.

The tower also holds on to the pollutants and blows out air that Roosegaarde says is about 75 percent cleaner than the air around it. It can clean 30,000 cubic meters of air in an hour, which Roosegaarde has said is about "a small neighborhood a day."

So why is this thing in China? The country emits the most carbon of any country in the world. The country's air pollution is responsible for an estimated 1.6 million deaths per year.

Despite those levels of air pollution, the Smog Free Project won't stay in Beijing forever. It's set to visit other cities in China and then go on a global tour.