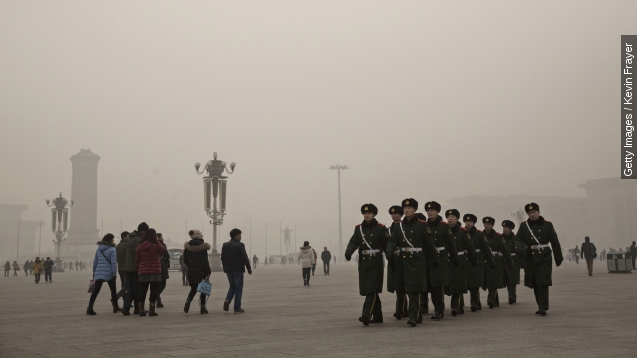 Smog levels in China are as high as they've been all year — just in time for an international conference on climate change.

People are being advised to stay indoors as northern cities, including the capital of Beijing, see their skylines made almost invisible by pollutants.

The Chinese government has sent out an orange alert, the second most severe rating. This means factories must cut production and large trucks will be kept off the road until smoggy conditions are reduced. (Video via CBS)

The levels of smog are quite literally off the charts. An Air Quality Index of 100 or more is considered dangerous by the World Health Organization. On Monday, levels in China grew to as high as 608 — a number listed as "beyond index."

China will be one of the biggest players in the talks. The world's largest carbon emitter predicts its emissions will peak by 2030. (Video via Vice News)

Authorities say burning coal is to blame for the recent smog flare-up, as is often the case, especially during the winter, when people are using coal to heat their homes and businesses.

A cold front moving into the area Wednesday should help clear out some of the smog.