'Smart Belt' Automatically Adjusts When You Eat Too Much 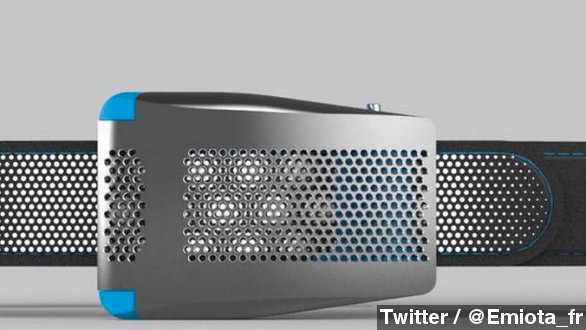 The Consumer Electronics Show kicks off this week in Las Vegas.

About 3,500 companies from around the world will be showing off some of the latest tech including ultra-high-resolution TVs, connected cars, Bluetooth-enabled home appliances and Belty the "smart belt."

Yes, a smart belt. You know, for that extremely strenuous activity of ... adjusting your belt.

"It will adjust as you sit down or you stand up, if you eat a big meal. It will also track the steps that you take every day, and you can send them to your cellphone app," explained KC Cassily of Belty maker Emiota.

The wearable waist tech was created by French company Emiota.

It works with the help of tiny motors hidden inside the bulky buckle, which is expected to undergo a bit of a makeover before the tentative end-of-year release date.

And while CNET definitely isn't the only one calling the contraption a bit ridiculous ...

"We'll see if this catches on. That's a terrible idea. That just allows you to eat more because then it will expand. They should cinch it in to stop you from eating," said an anchor for WITI.

Two anchors on KWGN joked, "They came up with the name Belty?"

"It does sound like a 4-year-old named the product."

In defense of, um, Belty, it does have its health benefits — which seem to be the main purpose of the gadget.

The Verge points out the wearable "collects data with a built-in accelerometer and gyroscope, then syncs wirelessly with a mobile app. This means it can track your waistline over time, keep tabs on your exercise, or check how much you sit and suggest you take a walk if you get too sedentary."

Hopefully we'll see it take on a more sporty look before it's released. As for pricing, Emiota hasn't given any exact numbers, but the product's not expected to be cheap. A rep told Mashable Belty is a "luxury product."