Smallest Visible Exoplanet Is Still Twice As Big As Jupiter 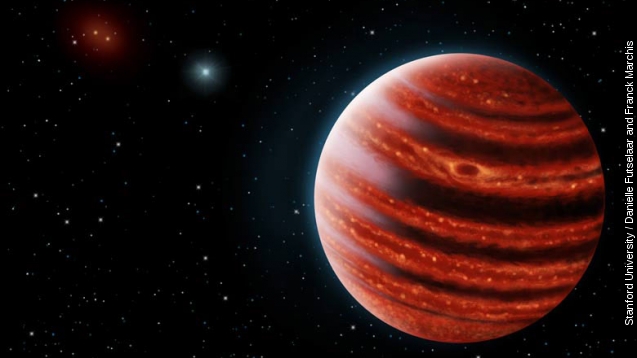 SMS
Smallest Visible Exoplanet Is Still Twice As Big As Jupiter
By Evan Thomas
By Evan Thomas
August 14, 2015
51 Eridani b is the smallest exoplanet we’ve ever obtained direct images of, and it could help explain how star systems form their attendant planets.
SHOW TRANSCRIPT

Exoplanet 51 Eridani b just set a record. It’s the smallest planet we've managed to take a direct image of, despite being twice the size of Jupiter.

To find 51 Eridani b, scientists used the Gemini Planet Imager to look at the planet’s infrared emissions. (Video via Gemini Observatory)

This is no small task, given the distances involved, the interference from our own atmosphere and the fact the planet is a million times dimmer than its star.

As one of the researchers said to The Washington Post, "You're basically looking for a firefly that's really close to a flood lamp, standing about a mile away and looking through a glass of water."

We’ve found most of the exoplanets we know about with NASA’s Kepler Telescope. It searches for the shadows an orbiting planet creates in front of its host star. (Video via NASA)

Having direct photographic evidence of 51 Eridani b will help researchers learn more about the formation of both the planet and the system as a whole than they might with Kepler. (Video via Gemini Observatory)

Lead researcher Bruce Macintosh says, "How all the weird systems we see and Kepler sees got to be there is the biggest exoplanet question right now, and everything we can do to understand it is critical."

The researchers have published their findings in the journal, Science.

This video includes images from Stanford University / Danielle Futselaar and Franck Marchis and music by Frenic / CC BY 3.0.