Small Hands And All, Rubio Makes Peace With Trump 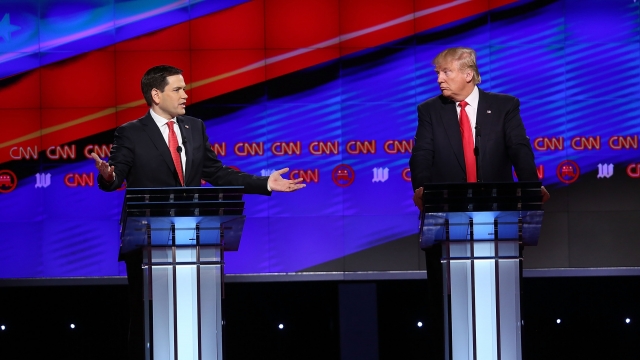 SMS
Small Hands And All, Rubio Makes Peace With Trump
By Melissa Prax
By Melissa Prax
May 29, 2016
Former GOP candidate Marco Rubio seems to be walking back some of the comments he made during his presidential run — like his jabs at Donald Trump.
SHOW TRANSCRIPT

Former GOP candidate Marco Rubio says he apologized to Donald Trump before a debate for a jab he made at the businessman during his presidential bid.

The Florida senator sat down with CNN on Sunday, where he talked about what he regrets from his failed campaign — including that comment about Trump's hand size.

Though Trump was quick to retaliate during a Republican debate in March.

"Look at those hands. Are they small hands?" Trump asked.

Rubio has repeatedly said he would support the Republican Party's nominee, whomever that may be.

And now that Trump has gained enough delegates for the nomination, Rubio's newfound preference for the businessman may have as much to do with disliking Hillary Clinton as anything else.

"Not only is she under FBI investigation, she lied to the families of Benghazi," Rubio said.

Rubio told CNN on Sunday he would be willing to stand up for Trump at the Republican National Convention in July.

"It is because in my view it wouldn't be the right choice for him," Rubio said.

"Could he possibly be on a list as a vice president of yours?" MSNBC "Morning Joe" host Joe Scarborough asked.

"Sure for sure, and he's got a lot of talent; I just don't want to say that yet, Joe," Trump said.

And while Trump seemed undecided back in March, Ben Carson — who's helping with Trump's VP search — has dropped Rubio's name into the mix.

This video includes clips from MSNBC, CNN, Fox News and ABC, images from Getty Images and music from Frenic / CC BY 3.0.