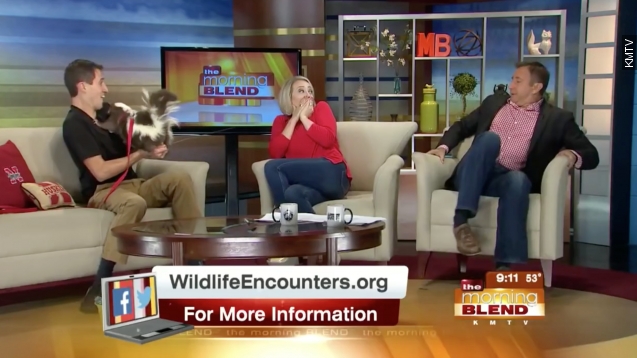 "You're totally safe with skunks," Kip Smith from the nonprofit Wildlife Encounters of Gretna told KMTV in Omaha, Nebraska.

If there's one thing we all know about skunks, it's that they can spray you.

A man with a nonprofit wildlife organization brought a skunk onto our partner station KMTV — and made the best of that whole people-are-scared-of-getting-sprayed thing.

"Their self-defense mechanism, they spray. It can shoot about 10 ... oh!" Smith said.

Are we bad people for laughing? No? Good.

"He had a little water bottle, he squirted it at me," KMTV anchor Mike DiGiacomo said.

And while we we were busy laughing at KMTV anchor Mike DiGiacomo walking off-set, it really didn't seem like he was down with the joke.

"That's the last time you're coming on the show. ... Get this guy out of here. Security!" DiGiacomo said.

We're just going to show it in slow motion and leave this here.