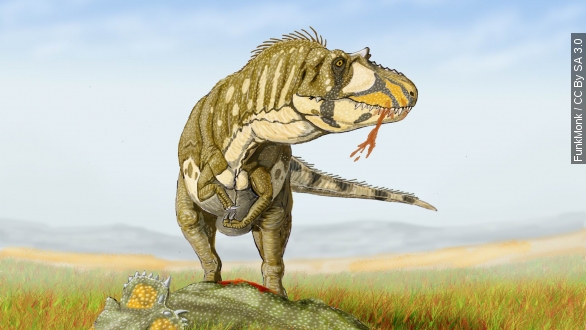 Life for dinosaurs was dog-eat-dog — literally. Scientists say that an ancient predator similar to tyrannosaurus rex likely ate its own kind.

The findings are based on the skull of a Daspletosaurus, a cousin to the more famous T. Rex.

What exactly killed the Daspletosaurus is still unknown, but scientists say some of the damage was done after it had died, evidence that it was likely eaten by its own kind.

The lead scientist for the study said, "This animal clearly had a tough life, suffering numerous injuries across the head including some that must have been quite nasty."

Some of the damage to the skull had signs of healing, leading researchers to believe the creature fought with other Daspletosaurus long before it was eventually killed.

The dinosaur lived roughly 75 million years ago. It's skull was discovered near Alberta, Canada, in 1994. At the time of it's death, it was about 10 years old, measured in at 20 feet long and weighed over a thousand pounds. If it would have reached adulthood, it could have grown to 30 feet in length.

At that time, Daspletosaurus would have been one of the larger predators in the area. T. Rex didn't arrive until about 10 million years later.

The idea that some tyrannosaurs might have been cannibalistic isn't new. This is just the oldest case scientists have discovered. As if, the dinosaur wasn't already menacing enough, there is other evidence that T. Rexes fought with and ate others of their kind.

The most recent findings were published Thursday in the journal PeerJ.