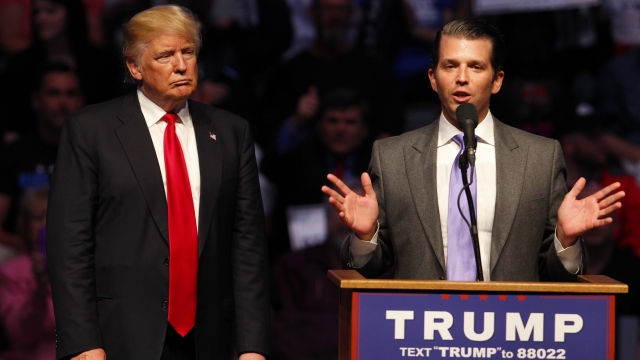 SMS
Skittles Responded To Trump Jr.'s Argument Against Syrian Refugees
By Ryan Biek
By Ryan Biek
September 20, 2016
Donald Trump Jr. tweeted, "If I had a bowl of Skittles and told you just three would kill you. Would you take a handful?"
SHOW TRANSCRIPT

On Monday, Donald J. Trump Jr. tweeted this. It reads: "If I had a bowl of Skittles and told you just three would kill you. Would you take a handful? That's our Syrian refugee problem."

The parent company of Skittles — and a lot of the internet — isn't so happy with that comparison.

Social media was in a frenzy, and political opponents — like President Barack Obama's speechwriter — dismissed Trump Jr. as inhumane for comparing millions of Syrians fleeing civil war and terrorism to candy.

The company sent a statement to the Hollywood Reporter that reads: "Skittles are candy. Refugees are people. We don't feel it's an appropriate analogy."

Beyond the human angle, Trump Jr. has faced criticism for his math. Mashable notes that, estimating the number of Skittles in the bowl featured in the picture, Trump Jr. gives Americans a 1.9 percent chance of being killed by a Syrian refugee.

But a recent study by the CATO Institute found the chances of being killed by a refugee of any nationality are 1 in 3.64 billion per year.

Trump Jr.'s argument may not be too original, either. Former Congressman Joe Walsh noted how similar Trump Jr.'s language was to a tweet he wrote last month.

Syrian refugees have become a divisive issue this election. Donald Trump has argued a lot of them "are ISIS," while Hillary Clinton said Sunday the U.S. should accept 65,000 Syrian refugees.