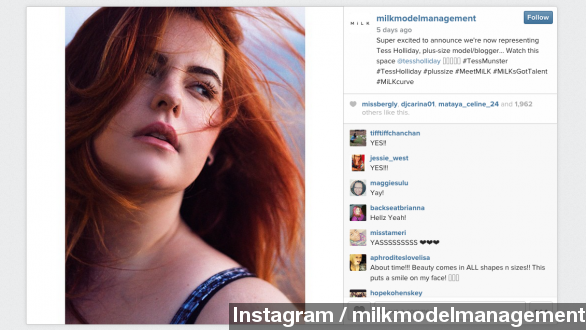 SMS
Size 22 Model Inspires #EffYourBeautyStandards Movement
By Cliff Judy
By Cliff Judy
January 27, 2015
Tess Holliday is being hailed as the first woman of her size to be signed by a mainstream modeling agency.
SHOW TRANSCRIPT

There's a new model the fashion industry is celebrating. She's unapologetic about her looks, she shows skin and she's a size 22.

MiLK Model Management announced Thursday via Instagram it signed 29-year-old Tess Holliday to a modeling contract, and Plus Model Magazine immediately hailed Holliday "the first plus size model of her size (22) and height (5’5″) to be signed to a [mainstream] agency."

Perhaps appropriately, the modeling agency's owner told New York Daily News she first noticed Holliday on Instagram where the L.A.-based model is not afraid of lingerie and has 345,000 followers as of Tuesday morning. The owner called her an important role model.

Holliday herself told New York Daily News, "I feel like it's breaking ground. This is a milestone. I never could have imagined that I could be here."

Holliday — formerly Tess Munster, which is still the name of her blog — says she started trying to land modeling gigs as a teenager, but she was told she was too short and heavy.

The industry is tough regardless, and more so for women who don't fit the tall, incredibly skinny profile.

This certainly isn't the first foray into plus-size modeling by a mainstream agency, though.

Calvin Klein quickly found out last year gaining respect from plus-size women wasn't so simple as having one wear its clothing when it signed Myla Dalbesio. (Video via InStyle)

When Calvin Klein hired Dalbesio — who's said her largest size ever was a 12 — the company came under intense criticism even though it never marketed her as plus size.

For Holliday's part, her signing helped spark the social media movement #EffYourBeautyStandards with plenty of people voicing their support for what they hope is better representation in mainstream media and fashion.

For anyone critical of her size or health, Holliday told New York Daily News she's very active, has a trainer and works out four times a week.

She's retweeted some fans' support, including one woman who tweeted her the hashtag along with a message it was her first time wearing a dress in a decade. Our favorite tweet might be Holliday's own message from late Monday night.

"I guess I'm trending online and my fat ass is all over the internet- sorry I'm not sorry y'all! HA! <3 #isthisreallife?"