Singapore Turns 50 As A Success Story, But Challenges Await 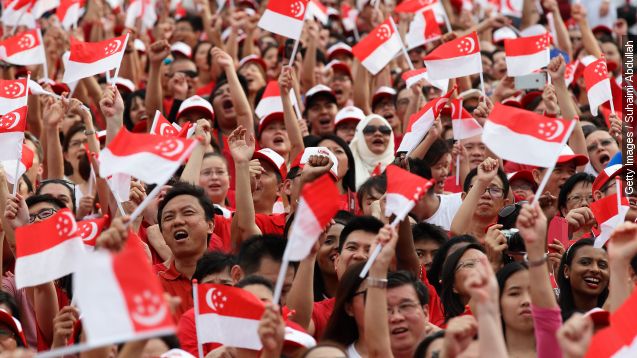 SMS
Singapore Turns 50 As A Success Story, But Challenges Await
By Matt Picht
By Matt Picht
August 9, 2015
Singapore is celebrating its 50th year of independence, and the wealthy city has plenty to be proud of — as well as plenty of challenges ahead.
SHOW TRANSCRIPT

"50 years ago, on this very night, Singapore was on the eve of a momentous change," Prime Minister Lee Hsien Loong announced.

The Republic of Singapore is celebrating its 50th year of sovereignty. And the city-state has a lot of achievements to be proud of.

After being forced out of Malaysia in 1965, Singapore was left with severe economic problems. Today, the city is one of the world’s largest financial centers and has one of the highest GDP per capita in the world.

But the city is celebrating its anniversary without its founding father. Singapore’s first prime minister Lee Kuan Yew died earlier this year, and the economic powerhouse of a city that he helped build is at a crossroads.

The hallmarks of Lee’s Singapore — meteoric economic growth and strict, near-authoritarian political control — are beginning to fade. GDP growth has dramatically slowed in recent years and the country’s aging population is struggling to keep up with the rising cost of living. (Video via CNN)

The government is currently halfway through implementing an economic restructure meant to address these challenges by reducing reliance on foreign labor and boosting productivity. Whether or not the plan ends up working, it has cost the city thousands of jobs.

Economic turbulence has hit the popularity of ruling People’s Action Party. The party's been in control since before the city became independent, but it suffered its worst losses ever in the 2011 election, though it still maintains a firm grip on power. It is now gearing up for the next election, which must be held before 2017.

And the government's strict controls over speech have also come under fire recently. Free speech advocates point to the case of Amos Yee, a video blogger who served jail time for posting a vulgar video criticizing Lee, as evidence the country's speech laws don't work in the age of social media.

But Singapore's anniversary celebration was still grand. The annual parade gives the government an opportunity to show off its oversized military budget, which accounts for 18 percent of government spending and is almost on par with the U.S. on a per capita basis.