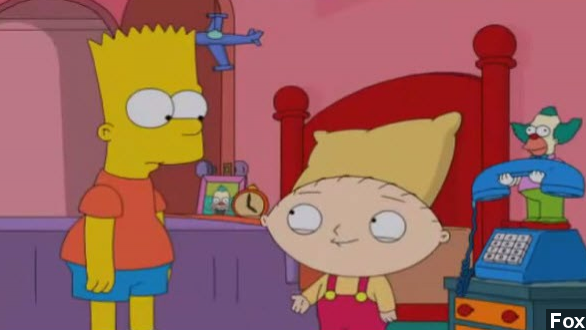 SMS
'Simpsons'-'Family Guy' Episode Offends Some With Rape Joke
By Madison Burke
By Madison Burke
September 24, 2014
The Parents Television Council is asking a rape joke to be removed from the upcoming "Simpsons"-"Family Guy" crossover.
SHOW TRANSCRIPT

The long-awaited "Simpsons"-"Family Guy" crossover will be here on Sunday, and people are already complaining that one of the episode's jokes is offensive for making light of rape.

Being blatantly offensive is pretty normal for some of "Family Guy's" gags, but many are saying the show goes too far in a teaser presented at this year's Comic-Con.

The controversial joke comes as Bart tries to teach Stewie how to make a prank call.

After the teaser was shown, the Parents Television Council issued a press release calling the creators of the shows to remove the joke before the special airs saying, "Rape is never a laughing matter."

And many on Twitter joined in asking that the joke be taken out.

Fox has not responded to the requests, but in a recent interview show creator Seth McFarlane said the joke is "pretty funny."

"Family Guy" faced similar criticism when it made a joke regarding Sarah Palin's son with Downs syndrome in 2010.

"My mom's the former governor of Alaska."

The Palin family was not amused.

PALIN: "This world is full of cruel, cold-hearted people who would do such a thing."

McFarlane responded to that criticism by mentioning the actress who said the line has Down syndrome herself and said Palin needs to get a sense of humor.