Sights And Sounds From The Orioles' Empty Game 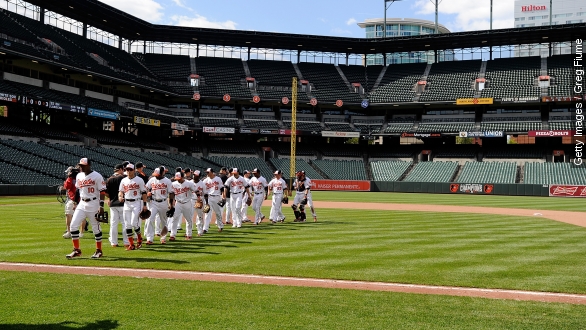 SMS
Sights And Sounds From The Orioles' Empty Game
By Christian Bryant
By Christian Bryant
April 29, 2015
The game was closed to the public, but it went on anyway. Here are some of the sights and sounds from Wednesday's Baltimore Orioles game.
SHOW TRANSCRIPT

“We just got an announcement from the press box that, for bookkeeping purposes, today’s official paid attendance is … zero,” Orioles broadcaster Gary Thorne said.

“The seats will be empty. There will be players on the field. There will be media here covering it. It is the first in major league history in which fans are prohibited from attending,” WJZ-TV's Mark Viviano said.

"I’m quiet because the silence is deafening, too, at Camden Yards despite the fact that it’s a rout for the home team,” Fox Business' Liz Claman said.

“Here at Orioles Park, the baseball was all being played out of reach. The forbidden game, some are calling it,” WMAR's Jeff Hagar said.

“They’re cheering as if they’re in the stadium. They’re chanting, ‘Let’s go, Orioles!’ That’s neat to see, but it’s only about 150 fans, and the view is not that great,” Brent Harris told MSNBC.

“We move on to the bottom of inning No. 7. Time now for what would ordinarily be the seventh inning stretch, but there are no people here to stretch here at Orioles Park at Camden Yards,” Thorne said.

"What a weird-looking scene out there, Rick,” Fox News' Shepard Smith said.

“It’s just strange to look around and see no fans inside,” WMAR's Katrina Bush said.

“The good news is that if my nose bleeds, nobody’s here to see it. Well, that’s correct,” Orioles broadcaster Jim Palmer said.

“The Orioles scored another run. They’re playing the hell out of this game with nobody there to see it. Should be a new policy … I think,” WBAL 1090AM's Derek Hunter said.