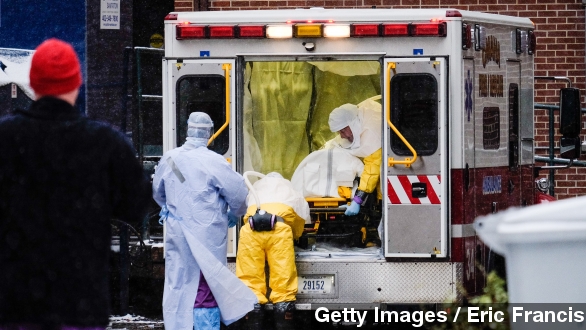 Dr. Martin Salia, the surgeon from Sierra Leone being treated in the U.S., has died.

The Nebraska hospital that was caring for Dr. Salia tweeted the news Monday morning, saying he passed away because of advanced symptoms of the disease and he was in extremely critical condition with his lungs and kidneys failing when he arrived.

Authorities took Dr. Salia to the Nebraska Medical Center Saturday because it has a special biocontainment unit and had already treated two other Ebola patients earlier this fall, both of whom recovered. (Video via Nebraska Medicine)

Salia lived in Maryland but had been working with Ebola patients at a hospital in Freetown in his native Sierra Leone when he tested positive for the virus on Nov. 10. (Video via The United Methodist Church)

Salia initially tested negative for the virus on Nov. 6, despite showing symptoms — something doctors say could have happened because he still didn't have enough of the virus in his system to show up on the test.

After he was diagnosed, doctors on the ground took five days to determine whether he was well enough to fly to the U.S., by which time his symptoms had advanced considerably.

The hospital says it used every available treatment on Salia, including the experimental drug ZMapp, as well as plasma transfusions from another Ebola patient who survived the virus.

In a press conference Monday, health officials said Salia was in the 13th day of his illness, while the other patients they treated arrived only six and eight days in.

The doctors also said the health workers who cared for Salia will be self-monitoring over 21 days, and they adjusted their equipment to compensate for the fact that Salia's advanced symptoms made him more contagious. (Video via MSNBC)

Salia is only the second person to die from Ebola in the United States — the other being Thomas Eric Duncan in Dallas in October. (Video via KJRH)

Some of Salia's blood samples will be sent to the Centers for Disease Control and Prevention, and his body will be cremated. He is survived by his wife and two daughters.