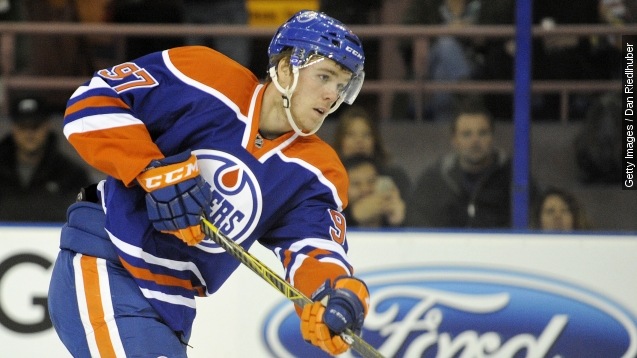 Hockey's next big thing will have to wait several weeks or even months to show off his skills.

Edmonton Oilers forward Connor McDavid exited Tuesday's game after slamming awkwardly into the boards during the second period. Oilers head coach Tom McClennan said the No. 1 overall draft pick suffered an upper-body injury and would be out "long term." (Video via FGL Sports)

And that's a shame not only for Oilers fans but for all NHL fans. The 18-year-old's been touted as the NHL's next big thing.

There's been a tremendous amount of hype around McDavid, who became the third player ever to be granted exceptional player status to play in the Ontario Hockey League at the age of 15. (Video via Biosteel)

He's been compared to current greats like the Pittsburgh Penguins' Sidney Crosby.

"Sidney Crosby for the rest of his career or would you rather have Connor McDavid for his entire, whole career?" A Sportsnet anchor asked.

"This guy is another superstar. Jump all over McDavid," Sportsnet's Doug MacLean said.

And through 13 games this season, it appeared McDavid was living up to all that hype. He's leading all rookies in points with five goals and seven assists.

"This is the one guy that the Edmonton Oilers couldn't afford to lose. They could afford to lose anybody else but this guy. He has become so important to this team," ESPN's Barry Melrose said.

The Oilers are expected to give an update on McDavid's condition Wednesday and could reveal the timetable for his return.