Should The U.S. Arm Ukraine? Merkel Doesn't Think So 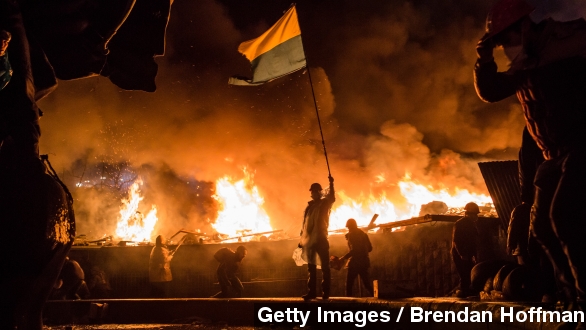 "As both Angela and I have repeatedly said, we want to see a diplomatic resolution in Ukraine," President Obama said in May of 2014.

The last time President Obama and German Chancellor Angela Merkel met to discuss the situation in Ukraine, there was general agreement on how to tackle the issue.

But this time, there's a key disagreement. (Video via YouTube / 1stVideoChannel)

"For God's sake, can't we help these people defend themselves?" Republican Senator John McCain said on CBS "Face The Nation."

The White House is thinking about arming the Ukrainians, which Merkel opposes.

She's suggested that would only make things worse by inciting Russia's Vladimir Putin and by making an already bloody conflict bloodier. (Video via Press TV)

Concern that's been echoed on the op-ed pages of some U.S. media — largely on the grounds that more weapons is likely to lead to escalation.

The Brookings Institute's Jeremy Shapiro, for example, says Russia's interests in Ukraine are much greater than that of the U.S. — both culturally and geographically. So the latter is likely to fight harder for the prize. (Video via RT)

It's worth noting that The Brookings Institute, however, put out a report that recommended the U.S. government arm Ukraine's military.

Ukraine only gets nonlethal aid from the U.S. right now. That includes things like first-aid kits, radar technology and body armor.

"We need to support the Ukrainians in defending themselves," said Secretary of Defense nominee Ashton Carter in his confirmation hearings.

By most calculations, Ukraine is losing the war against the separatists, with heavy losses in the eastern part of the country. (Video via YouTube / PL Win)

Ukraine will spend $5 billion on its military, while Russia has 16 times that in its 2015 defense budget: $81 billion.

Representatives of Russia, Ukraine, Germany and France will meet later this week for ceasefire talks in Belarus. There aren't many signs those talks will immediately be fruitful.