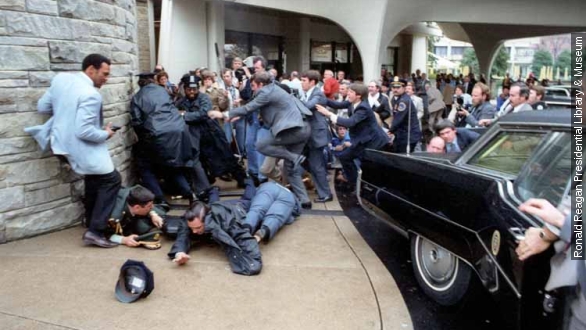 SMS
Should Ronald Reagan's Would-Be Assassin Be Released?
By Christina Hartman
By Christina Hartman
April 27, 2015
John Hinckley Jr. has been a patient at a psychiatric hospital for the past three decades and already spends more time outside its walls than inside.
SHOW TRANSCRIPT

You can't see him in this photo taken right after because he's covered by Secret Service agents.

And this is his FBI mugshot, taken in 1981, about a year before a jury found him not guilty by reason of insanity.

For the past 30 years or so, Hinckley has passed time in this D.C.-area psychiatric hospital — with unsupervised visits to his mother in Virginia a dozen times a year.

But now his treatment team at St. Elizabeth's Hospital says Hinckley has recovered enough to live at home with his mom full time. As in, basically as a free man, though likely with Secret Service and local police monitoring, as well as a few other restrictions.

"I don't much care if he gets to visit his mother and go to movies, but the idea of leaving a guy who did what he did and who has the psychological profile that he has unsupervised in society strikes me as monumentally unwise," Ronald Reagan Jr. told MSNBC's Chris Matthews in 2011.

And that was the voice of the former president's son Ron Reagan in 2011 — when the possibility of Hinckley living at home was first seriously discussed.

"Well, he has had a pattern of being deceptive."

"Not too long ago, on one of his outings, he told the hospital that he was going to a movie. And the Secret Service agents who were trailing him say that he was at a library looking at books on my father and also looking at presidential assassins."

Now, Davis may have been referencing the 2012 testimony of two Secret Service agents, who actually said it wasn't a library but rather a nearby bookstore.

The Washington Post instead characterizes the incident like this: "Hinckley appeared to examine a shelf in the American history stacks that included a book that examines the 1981 assassination attempt."

Those Secret Service agents never saw Hinckley pick up or look through the book. Still, the point Davis was making is that she believes Hinckley shouldn't be granted convalescent leave. Though it wouldn't be too far from where he is now.

A judge's order allows him to spend 17 days every month at his mom's house, so he's already spending more time outside the hospital than inside.

Hinckley attempted the assassination more than 30 years ago, he says, in an effort to impress actress Jodie Foster — who he'd called repeatedly when they were both students at Yale University.

"Oh no, not you again!" Foster is heard saying in a recording of one such call.

But — perhaps in an effort to show he's over that obsession — Scott Hinckley recently testified that his brother has a new girlfriend.

And a recent post by the editorial board of The Denver Post notes — at least in Colorado — people found not guilty by reason of insanity in first-degree murder cases spend at average of 7.4 years in the state mental hospital.

Hinckley isn't in Colorado, and he didn't attempt the assassination of just anyone. But his attorney says his client is "clinically ready" to be an outpatient and is no longer dangerous.

Federal prosecutors are asking for dozens of conditions, including an ankle monitoring bracelet. We could learn Hinckley's fate as early as this week.

This video includes images from the Ronald Reagan Presidential Library & Museum, the FBI, and Getty Images.