Should Our Potential Robot Overlords Come With A Killswitch? 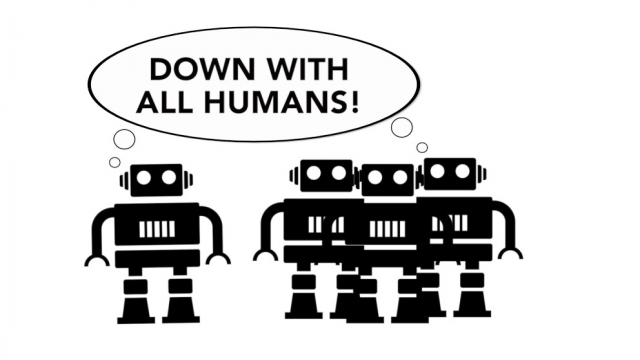 SMS
Should Our Potential Robot Overlords Come With A Killswitch?
By Leah Becerra
By Leah Becerra
June 4, 2016
Researchers have been looking into what would need to happen to create a big, red shut-off button for killer robots.
SHOW TRANSCRIPT

If, somehow, all these machines we're creating decided to rise up against humans, wouldn't it be nice to have a big, red button to shut it all down?

And it's not just every person who's ever watched a Terminator movie who thinks that way — some researchers do, too.

One of Google's DeepMind scientists and another from the University of Oxford wrote a paper on "safely interruptible agents."

Their paper looked into the possibility of a hit-in-case-of-Skynet-emergency button. Though, it could also be used to shut down a machine that's acting up in a more controlled space — like in a factory, for instance.

But there's a problem with just creating a button that shuts down potentially harmful robots. Because if the robots are aware of the button, they'd just — you know — reconfigure it.

I mean, if I were a Terminator, that's what I would do.

Don't worry; the researchers thought of this. They write, "This paper explores a way to make sure a learning agent will not learn to prevent (or seek!) being interrupted by the environment or a human operator."

You see, a "safely interruptible agent" is a robot that never fears an off switch, even though they know the button exists. These agents would have to be taught to be indifferent to a person's intervention.

So, robots should be programmed to be more like C-3PO and less like, well, a Terminator. Good to know.