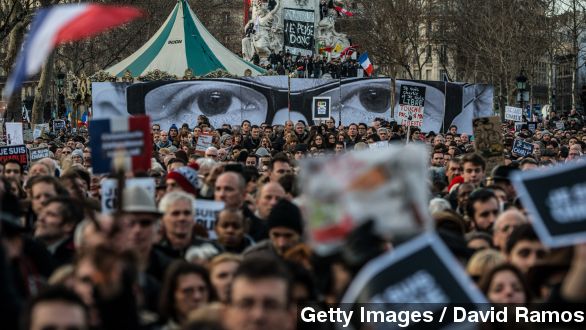 Less than a week after the massacre at Charlie Hebdo, the surviving staffers have released a new issue. And in a show of defiance, a cartoon of the Prophet Muhammed is on the cover with the words, "All is forgiven."

A lot of news outlets covering the cover chose not to show it, us included.

It's a difficult balance for newsrooms who have to consider both their obligation to present information to the public and whether that information could offend.

Ron Fournier at National Journal says the public's right to know must come first. He writes, "People want to see the images, and they need to see them — if for no other reason than to understand the depraved minds behind Islamic extremism."

And others have argued there's no better way to show support for freedom of speech than to publish the very images that inspired the gunmen. That's clearly the position Charlie Hebdo has taken. (Video via YouTube / Actualités HD)

The paper's spokesperson told reporters: "We are not giving an inch. The spirit of 'Je suis Charlie' also implies a right to blaspheme."

On the other side of the debate are those who say just because you defend Charlie Hebdo's right to offend doesn't mean you're required be offensive yourself. And to be sure, Charlie Hebdo's covers could at times be incredibly offensive — even hateful.

As Slate's Jordan Weissmann writes: "We have to condemn obvious racism as loudly as we defend the right to engage in it. We have to point out when an 'edgy' cartoon is just a crappy Islamophobic jab."

Charlie Hebdo is printing 3 million copies of its latest edition — way more than the 60,000 it usually runs. The special issue hits newsstands on Wednesday.