Should Major College Football Teams Beef Up Their Schedules? 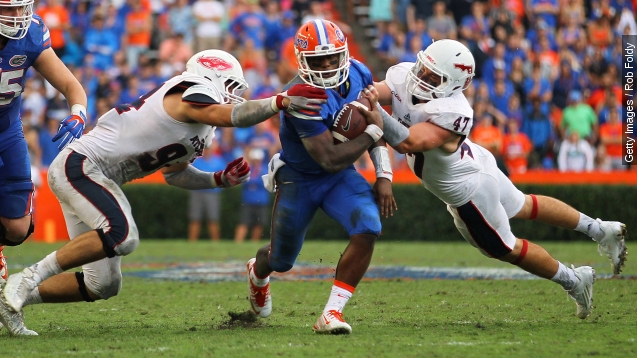 SMS
Should Major College Football Teams Beef Up Their Schedules?
By Carter Woodiel
By Carter Woodiel
November 22, 2015
A few SEC schools faced lower-division programs last week, and some games were nail-biters. But should these matchups even happen?
SHOW TRANSCRIPT

Saturday was supposed to be an easy week for SEC football, with much of the conference squaring off against smaller, overmatched schools. But there were a few unexpected nail-biters.

The SEC East champion Florida Gators beat the now 2-9 Florida Atlantic Owls in overtime. Georgia also needed an extra period to put away the Sun Belt's Georgia Southern. And South Carolina lost to The Citadel, the first time in five years a team outside college football's top division knocked off an SEC school.

Perhaps those teams should have heeded the words of Alabama head coach Nick Saban who said to reporters his squad needed to give Charleston Southern their full attention this week.

"You may be taking the week off this week, but I'm not," Saban said at a press conference. "I get asked questions like, 'How important is it for the young guys to get to play this week?' Well, how in the the hell do you know they're going to play?

Of course, there are other ways for Saban and other schools to avoid this headache. Arkansas head coach Bret Bielema recently proposed a yearly non-conference series between the SEC and the Big Ten.

According to Bielema's idea, teams from those two Power-5 leagues would be ranked from best to worst and face off against the corresponding team in the other conference, something conferences already do during basketball season. (Video via University of Arkansas)

This plan might be better suited for college football's still-young playoff selection committee. It's shown it puts strong emphasis on strength of schedule, something that's hurt when a big-time school lines up against a minnow. (Video via ESPN)

While a few other SEC coaches, including Saban, support major-conference teams facing off, there's opposition, too.

Georgia head coach Mark Richt says phasing out lopsided matchups would put too much financial strain on the smaller opponents because those schools are often paid handsomely by their opponents. (Video via Athens Banner-Herald)

For example, Savannah State, which struggles to win even against lower-division teams, got $300,000 to play Colorado State in September, which ended in a 52-point loss. (Video via WJCL)

And in 2012, the Tigers made $860,000 by getting walloped by Oklahoma and Florida State. That’s about 17 percent of their athletics budget for that year.

So it might be difficult to reform the current system. Either way, big-time schools will have to be ready for smaller programs because anything can happen in college football. Just ask South Carolina.