The Argument For Changing 'Columbus Day' To 'Indigenous Peoples Day' 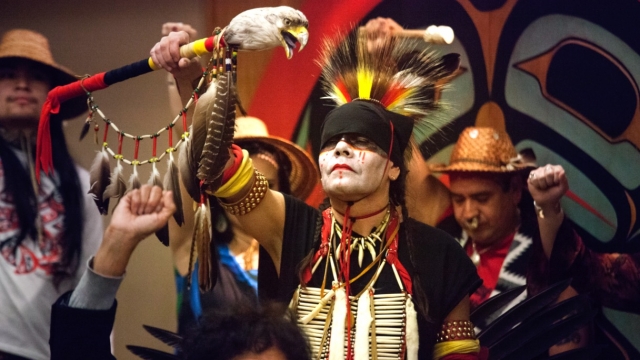 "You can't teach American history without Native American history," said Kathleen McDonald, executive director of the Mitchell Museum of the American Indian in Evanston, Illinois. "I think people need to acknowledge that a little bit more."

"What Indigenous Peoples Day actually does is it reminds you how to actually understand what happened in 1492," said Eli Suzukovich III, a Northwestern University anthropologist.

In 2016, Evanston, Illinois, will recognize Indigenous Peoples Day for the first time. It's following in the footsteps of Berkeley, California, which first celebrated the holiday in 1992. Since then, cities like Seattle, Minneapolis and Portland, Oregon, have taken part in the celebration.

It's an alternative to Columbus Day and celebrates Native American culture, acknowledging the many tribes who lived across America long before Columbus could even say Niña, Pinta or Santa María.

"So many people know the Columbus story but don't think about the impact that that had and continues to have for Native people and indigenous people around the world," said McDonald, who led the push to change in Evanston.

"The Native American history and contemporary culture is surprisingly vacant from so many conversations and stories and teachings," McDonald said. "It's about appropriately interpreting history and not putting an individual on a pedestal."

Like in New York's Columbus Circle, where we literally hoist up the Italian explorer atop a grand monument.

And to some, like those in Chicago's Italian American Human Relations Foundation, celebrating Columbus and his achievements should be preserved.

He told a local paper: "I don't understand why it has to fall on Columbus Day. There are so many other days. But there's a group of people that feel that whatever good came from Columbus landing on the shores of the Americas, all the evil that's happened since 1492 is his fault."

For McDonald, there wouldn't be "a teaching of Indigenous Peoples Day without Columbus." She says she hopes "folks that are celebrating Columbus Day would think more about the people who were here when Columbus arrived and the impacts that have continued to happen for those communities."

Special thanks to Genesis Tuyuc, Kenia Guillen, Angelo Baca and Beyond Buckskin.