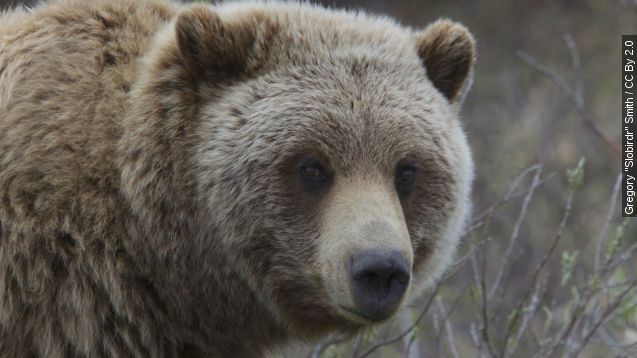 SMS
Should Grizzlies Stay On The Threatened Species List?
By Kaileen Gaul
By Kaileen Gaul
November 2, 2015
The grizzly population seems stable, but some fear that removing the bears from the threatened species list will open the door to excessive hunting.
SHOW TRANSCRIPT

Yellowstone National Park's grizzly population jumped this year, and some think it's time to take the bears off the threatened species list — again. (Video via Animal Planet / "Viking Wilderness")

Grizzlies were granted protection under the Endangered Species Act in 1975 as a "threatened" species in the lower 48 states. But 40 years later, it seems they may not need that level of protection anymore.

Molecular Ecology published a study last week that found the population has been growing since the '80s, suggesting the bears are in a pretty stable position.

The Wyoming Game and Fish Department is in favor of de-listing the bears, and the National Wildlife Federation agrees. The NWF said, "All of the recovery goals—population, distribution and mortality—needed to qualify bears for release from the Endangered Species Act's emergency room care have been met or exceeded."

But not everyone agrees. Taking the bears off the endangered list means they can be hunted, which is concerning to some animal rights activists.

Daniel Thompson, a specialist for the Wyoming Game and Fish Department, told the Missoulian: "This should be a very positive story, but there's a lot of arguing in the background. And it ignores the sacrifices of the people on the ground who live in grizzly bear country."

In fact, the population is doing so well there's stiff competition for natural food sources among the bears, which means the bears have been hunting outside their normal habitats.

This year, wildlife managers euthanized 24 grizzly bears in the Greater Yellowstone Ecosystem, mostly for killing livestock or for becoming accustomed to human food.

As we mentioned, the push to de-list the grizzlies is nothing new. In 2013 the Yellowstone Ecosystem subcommittee and Interagency Grizzly Bear Study Team recommended that their threatened status be revoked.

Prior to that, grizzlies were briefly removed from the threatened species list in 2007, but they were returned to the list in 2009 when a federal district judge overturned the ruling.

Even if grizzlies are de-listed again, Yellowstone probably won't turn into a bear-hunting free-for-all zone. The National Wildlife Federation said it will designate a 6 million-acre conservation area for grizzlies to thrive.