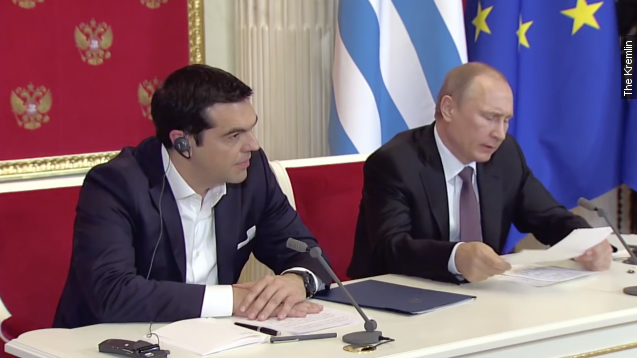 SMS
Should Europe Worry About Cozy Greece-Russia Relations?
By Kate Grumke
By Kate Grumke
June 19, 2015
A closer relationship between Greece and Russia could spell trouble for the interests of European countries.
SHOW TRANSCRIPT

As Greece and Russia cozy up, should the rest of Europe be wary?

Russia and Greece's announcement that they had signed an agreement for a natural gas pipeline Friday is the latest sign the two countries are cozying up to each other, which could spell trouble for the rest of Europe.

Neither Greece nor Russia are on particularly good terms with the European Union, right now.

Greece is in the middle of a debt crisis that, in a worst-case-scenario, could mean an exit from the eurozone. On Thursday, yet another round of talks ended with no agreement from Greece to pay its debt.

And Russia has been hit hard by western-imposed economic sanctions because of its role in Eastern Ukraine.

In April, Greece's Prime Minister Alexis Tsipras was in Moscow to meet with Putin, where he called for an end to the sanctions against Russia. (Video via The Kremlin)

On Friday, Tsipras was in Russia again to meet with Putin. There are rumors Russia is considering giving Greece financial support, in the form of a loan to pay its debt, which presents a problem for Eurozone leaders. (Video via BBC)

As Foreign Policy writes, "Germany's Angela Merkel's own conservative party, the German people, and bankers in Frankfurt have all made clear they don’t want to continue to pay for Greece if Athens doesn’t heed calls to reform. But she’s under pressure from Washington to maintain an alliance that won’t upset the apple cart when it comes to sanctions."

So essentially, the European Union needs Greece to continue to keep up the sanctions against Russia, because they need a unanimous vote.

After signing the Russian pipeline agreement Friday, Greece's energy minister said, “The project we start today isn't against Europe ... We are sending a message of stability in Europe without divisions.”

The rest of Europe has its own pipeline project, the Trans Adriatic Pipeline, which would start in Azerbaijan and go through Greece. Russian media quoted Greece's energy minister as saying that the U.S. had tried to steer Greece away from the Russian pipeline and toward the TAP. The U.S. says it supports diversifying Europe's energy supply.

Putin and Tsipras will meet later Friday, which is when we could find out if the rumors are true about Russian financial help for Greece.

Correction: A previous version of this video said the most recent talks about Greece’s debt ended Friday. They actually ended Thursday. This video has been updated.