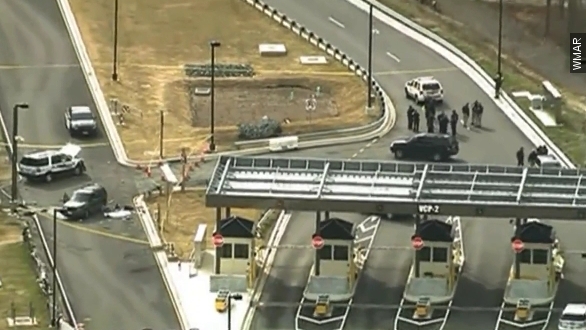 SMS
Shooting Outside NSA Gate Leaves 1 Dead
By Katherine Biek
By Katherine Biek
March 30, 2015
One person is dead after the driver of a vehicle might have tried to ram the main gate of the National Security Agency on Monday morning.
SHOW TRANSCRIPT

One person is dead after a vehicle with two people in it might have tried to ram the main gate of the National Security Agency at Fort Meade, Maryland, on Monday morning.

Officials immediately detained reporters, keeping them about a mile or more away, according to Fox News. So early on, the only images we were getting from the incident were from news helicopters.

Early information is pretty limited. The Washington Post is reporting law enforcement officials say shots were fired, killing one and injuring at least one other.

And the FBI released a statement to NBC saying the agency doesn't believe this is terrorism-related.

Our partners at WMAR are reporting there was cocaine and a weapon found "in or near the suspects' car."

According to its website, the installation at Fort Meade houses around 11,000 military personnel and 29,000 civilian employees. The NSA has yet to release a statement about the incident. (Video via WMAR)