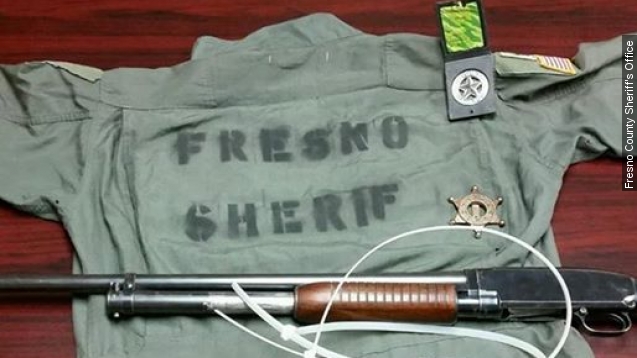 By Jake Godin
September 18, 2015
Well, who couldn't have seen that coming? Three were arrested in Fresno after supposedly impersonating police officers and misspelling "sheriff."
SHOW TRANSCRIPT

Three men were arrested in Fresno, California, on Thursday in connection to home robberies and impersonating police officers. Something was off about their disguises, though.

Ah, yup, there it is. Sheriff — spelled with only one F. That gets 'em every time.

While it's not clear if the misspelling actually led to their arrest — we're sure it didn't help.

According to the Fresno County sheriff's department, the trio is suspected to have been posing as law enforcement officers and raiding locations where marijuana was being grown.

Along with the poorly spelled green flight suit, officers found other law enforcement-related gear such as security badges and an expandable baton.

A pump-action shotgun and ammo were found in an SUV believed to be associated with the robberies.

There have been other, albeit more minor, instances of criminal misspelling.

In August, a woman was arrested after keying two cars — her boyfriend's and a girlfriend of hers. On her friend's, she scribbled the word "wore."

We're guessing you can figure out what she was going for there. It's something that, according to the Stamford Advocate, was enough for police to get a warrant for her arrest.

And in February, some graffiti bandits scrawled obscene images on an Indiana bridge. Included, was a misspelled message to the devil — "Hail Satin."

We're not sure what the lesson is here, but it probably has something to do with taking the time to at least spell correctly if you're going to commit a crime and make the news. Otherwise, you just look ridiculous.