Shark Takes A Bite Out Of California Woman's Surfboard 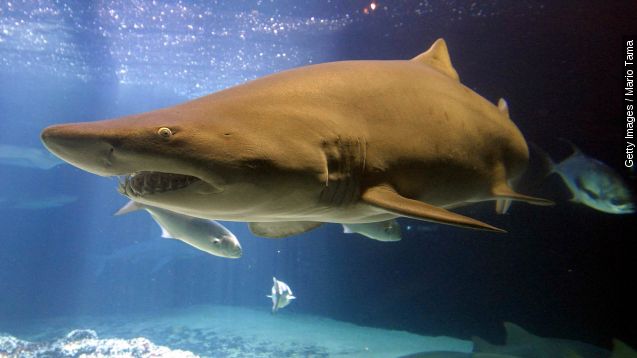 SMS
Shark Takes A Bite Out Of California Woman's Surfboard
By Matt Moreno
By Matt Moreno
August 30, 2015
A woman was surfing near Morro Bay, California, Saturday when a shark took a bite out of her board. She escaped uninjured.
SHOW TRANSCRIPT

A California woman survived a terrifying shark attack over the weekend. Her surfboard wasn't so lucky, though.

Elinor Dempsey was out surfing Saturday morning off the coast of the small California town of Morro Bay when a shark took a huge bite out of her board. Dempsey, who wasn't harmed, says she immediately swam right back to shore without looking back.

A reporter for the San Luis Obispo Tribune was on hand shortly after Dempsey escaped the shark attack.

"He was this close so I thought it was a dolphin. He bit the board and I just started swimming," Dempsey said.

The outlet says the bite was 13.5 inches wide and the shark could've been anywhere from 7 feet to 15 feet long.

Dempsey is definitely lucky to have escaped without injury. Months ago in the same area, Kevin Swanson was bitten by a shark and dragged underwater. He left with a gash in his leg but did survive.

Despite all the attention shark attacks seem to get, they're actually fairly rare, and fatalities are even more uncommon.

There's been just one fatal shark incident in the U.S. this year. It involved a snorkeler near Maui, Hawaii.

And the last fatal shark attack in California was in 2012.

Though the Florida Museum of Natural History notes the San Luis Obispo area, where Saturday's shark attack happened, does see more attacks than most of California. The latest fatality from a shark there occurred in 2003. (Video via KGTV)

Officials closed the beach for 72 hours after Saturday's attack.

This video includes an image from Ron Reiring / CC BY 2.0.