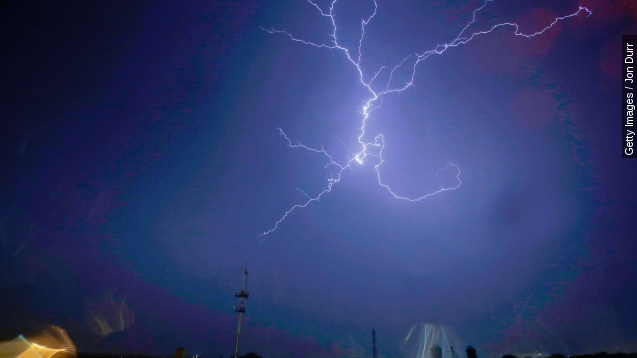 SMS
Severe Weather Moves Toward Northeast After Hitting Midwest
By Katherine Biek
By Katherine Biek
June 23, 2015
Severe weather swept across the Midwest on Monday evening in the form of a derecho and multiple tornadoes.
SHOW TRANSCRIPT

Tornadoes touched down in five counties outside of Chicago Monday night.

WLS-TV reports one hit Coal City, about 60 miles from Chicago, around 10 p.m.

"A lot of homes have been damaged, power lines are still down throughout the area, you can smell natural gas — so we've got some leaks all over as well," a WLS-TV reporter said.

"If we just come over here, you can see how the roofs have been blown off these homes in the subdivision right over there," a WBBM reporter said.

Quite a bit of damage was also reported in the town of Sublette, where the Chicago Sun-Times reports one person was injured, but is now in stable condition at an area hospital.

WMAQ reports four other people were treated for injuries at a campground where the tornado struck.

That severe weather wasn't contained in Illinois, though.

Our partners at WXYZ report at least one confirmed tornado touched down in Michigan, Monday. There are four more possible tornadoes that have yet to be confirmed by the National Weather Service.

And NBC reports a derecho, which contains extremely powerful winds, swept across the Midwest.

The Weather Channel reports severe weather is expected to head toward the Northeast Tuesday.