Severe Storms Kill At Least 7 In The Southeast 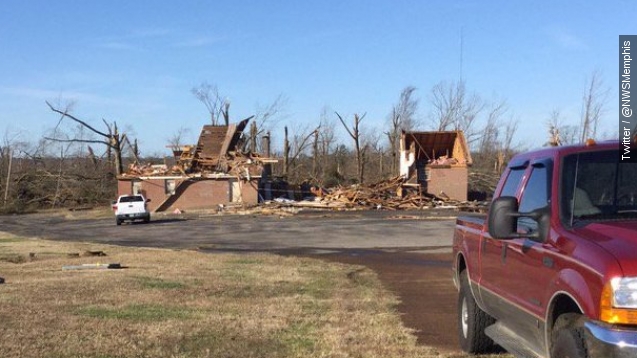 SMS
Severe Storms Kill At Least 7 In The Southeast
By Matt Moreno
By Matt Moreno
December 24, 2015
Deaths were reported in Arkansas, Mississippi and Tennessee after tornadoes and severe thunderstorms ripped through the area Wednesday.
SHOW TRANSCRIPT

At least seven are dead and a number more are injured after violent storms ripped through the Southeastern United States on Wednesday. (Video via KFTA)

"It's like 10 to 15 houses totally gone. They're totally gone," a responder for Coahoma County Fire said.

Deaths were reported in Arkansas, Mississippi and Tennessee as unseasonably warm weather fueled storms in the area. (Video via CNN)

"I laid down, on the ground, and here comes the tornado. ... Uprooting trees, cutting trees in half. I don't know why I'm still standing here," storm survivor Lance Meeks told Louisiana's WVUE.

A mix of tornadoes and severe thunderstorms caused all the destruction. (Video via WDBD)

Officials believe at least 14 tornadoes touched down in Mississippi on Wednesday, with one touching down for about 100 miles and stretching into Tennessee. (Video via KTHV)

The Southeast wasn't the only area impacted by the storms. (Video via WRTV)

Indiana's WISH-TV reports at least one tornado touched down in Greenwood, just south of Indianapolis.