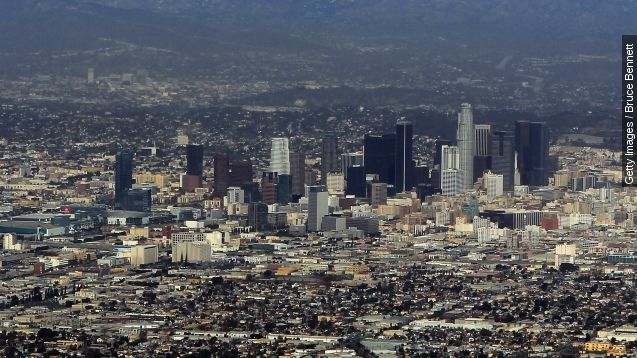 SMS
Severe Natural Gas Leak In Los Angeles County Could Be Major Disaster
By Briana Koeneman
By Briana Koeneman
December 28, 2015
The leak is releasing up to 110,000 pounds of gas per hour. An underground well-casing might have failed, pushing the pressurized gas to the surface.
SHOW TRANSCRIPT

A massive natural gas leak from a Los Angeles County storage facility is pouring millions of pounds of methane into the atmosphere, and California officials say it's shaping up to be major ecological disaster.

Officials told The Washington Post the Aliso Canyon leak was first detected more than two months ago and is releasing about 110,000 pounds of gas per hour. It's invisible to the naked eye, but the outlet recently obtained infrared video showing the dangerous gas billowing into the air.

On top of being an explosive hazard, the methane is also a potent greenhouse gas that's reportedly affecting both the atmosphere and the well-being of many nearby residents. (Video via KTTV)

Thousands have been forced to evacuate the area, and students there will have to move to different schools. And several lawsuits have already been filed by people who claim they've been harmed by the leak. (Video via Los Angeles Times)

"I have felt the effects, as my husband has — the stomach, the vomiting, the headaches. But when my 17-month-old son has to be on a nebulizer and comes home with bloody noses, there's no excuse," resident Robin Shapiro told NPR.

A spokesperson for the storage facility's owner, Southern California Gas Co., told the Los Angeles Times the leak likely began when an underground well-casing failed, which allowed pressurized gas to push through to the surface.

So far, efforts to contain the gas leak have been unsuccessful, and state officials say it could take months before it's stopped. (Video via KCBS)