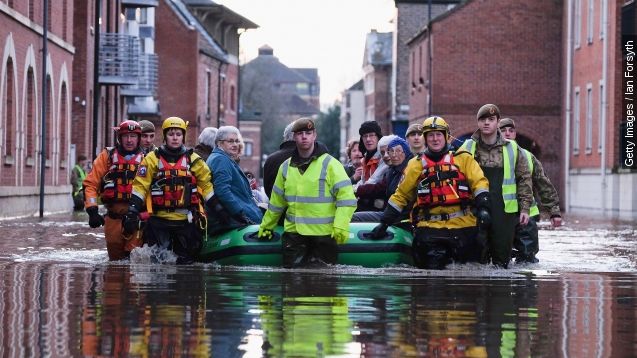 SMS
Severe Floods In The UK Prompt Evacuations
By Melissa Prax
By Melissa Prax
December 27, 2015
There have been hundreds of flood warnings throughout Wales, Scotland and northern England.
SHOW TRANSCRIPT

Major flooding is happening across the U.K., specifically in Wales, Scotland and northern England.

Thousands are without power and have evacuated from their homes. Prime Minister David Cameron held an emergency cabinet meeting Sunday morning to address the floods.

Cameron is expected to call for more aid in affected areas. The government already announced it would put $4.3 million toward rebuilding roads in Cumbria and Lancashire England that were damaged in the floods. (Video via ITV)

As of Sunday morning, there were hundreds of flood warnings and alerts issued throughout the U.K., including 24 severe flood warnings — considered a "danger to life."

Some York residents told Sky News this was the "worst flood" they've seen in 15 years.

For perspective, one part of York's River Ouse is only about a foot and a half from the highest point it's ever been: 18 feet.

That same river's barrier in another part had to be lifted for fear of electrical problems from the pumps overworking.

This is the second major storm to hit the U.K. in recent weeks. At least one person died in flooding from Storm Desmond in early December.