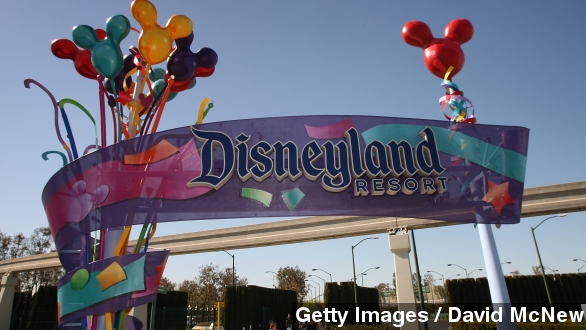 SMS
Several Measles Cases Tied To California Disney Parks
By Jay Strubberg
By Jay Strubberg
January 8, 2015
Health officials say seven people from California and two others from Utah came down with the measles and all visited Disney parks over the holidays.
SHOW TRANSCRIPT

The California Department of Public Health says seven people from California and two others from Utah came down with the measles. They all visited Disneyland or Disney California Adventure Park between Dec. 15 and Dec. 20. (Video via KNBC)

Health officials say it's not for sure where these people became infected, but it's likely the rare virus spread from one person around those theme parks during that period before the holidays. (Video via KOVR)

"The only way you can catch the measles is from somebody who has the measles. ... If you're within sneezing distance or coughing distance or if you even touch something and rub your face or your eyes, you can get the disease," Internal Medicine Specialist Dr. John De Bexeidon told KABC.

The Centers of Disease Control and Prevention says measles symptoms usually include high fever, cough, runny rose and red eyes. A rash will then break out days after symptoms appear. (Video via KNTV)

But health experts say a few doses of a special measles-based vaccine is about 99 percent effective at making sure you don't get it.

"Definitely do recommend that, if your child hasn't got the measles vaccine, that they get it because they can get very sick from it if they catch measles," Dr. Kathy Lalezarzadeh told WCBS.

Vaccines virtually eradicated measles in the U.S. in 2000, with typically fewer than 100 cases per year since then. But 2014 was a different story.

The CDC says there was a huge influx last year, reporting 610 cases across half of U.S. states.

The agency says much of the spike has to do with international travelers who bring the virus to the U.S. and visit areas with large groups, such as certain tourist attractions. (Video via Disney Parks)