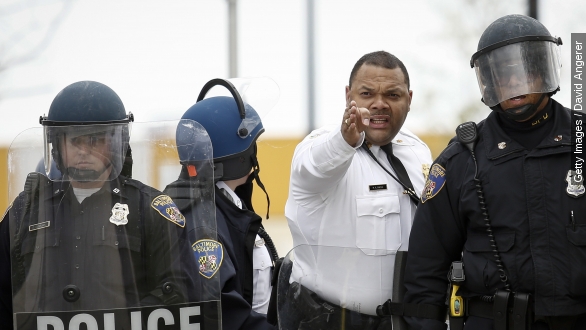 Just hours after the funeral for Freddie Gray, a 25-year-old man who died while in police custody, riots erupted in Baltimore Monday afternoon. (Video via WMAR)

Police say the incident stems from an call on social media for a "purge" to take place at 3 p.m. The idea comes from the movie "The Purge," which focuses on what would happen if all laws were suspended.

According to WMAR, Police believe they have received "credible information" that various gangs have entered into a partnership to "take out" law enforcement officers.

A spokesman from the Nation of Islam took credit for bringing rival gangs together but said it was a march against police brutality and made no mention of violence, telling The Daily Beast, "We can unite and stop killing one another, and the Bloods and the Crips can help rebuild their community."

Maryland Gov. Larry Hogan has put the National Guard on alert following the riots, and the Baltimore Orioles baseball game has been postponed over safety concerns.