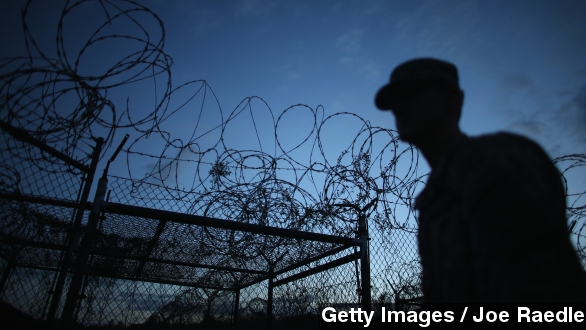 Another prisoner was released from Guantánamo Bay Saturday, the seventh person to be transferred from the infamous detention center in recent weeks.

The man was returned to his home of Saudi Arabia to enter that country's rehabilitation program. He had spent 12 years in the detention facility. (Video via RT)

Earlier this week, three men were resettled in the country of Georgia and and two more were sent to Slovakia for resettlement. Another detainee was sent to Kuwait about two weeks ago.

There are approximately 100 fewer prisoners at Guantánamo now than there were six years ago when Obama took office. The facility's population is currently 142 — 72 of which are not believed to pose a threat to the U.S. and are eligible for transfer.

Closing the controversial detention center has been one of President Obama's longstanding promises on which he has struggled to deliver.

Obama said in 2013, "Guantanamo is not necessary to keep America safe ... It needs to be closed."

Fox News writes the source of troubles for closing the base came from Congress who imposed restrictions that brought his efforts to a halt. Congress has since eased those restrictions.

The other problem with closing the base is it's simply hard to find places to send detainees.

The Los Angeles Times explains, "Longstanding U.S. allies have been reluctant to take in men the Pentagon has branded as dangerous terrorists for more than a decade, nor do they want to be seen as legitimizing a detention practice widely condemned in the democratic world."

It also doesn't help that 80 of the remaining detainees are from Yemen. The U.S. has stopped sending prisoners to Yemen over fears they could be tortured or executed by a Yemeni government that's currently fighting a division of Al Qaeda.

Four of the prisoners sent to Georgia and Slovakia are Yemenis, making them the first Yemenis to be released since 2010.