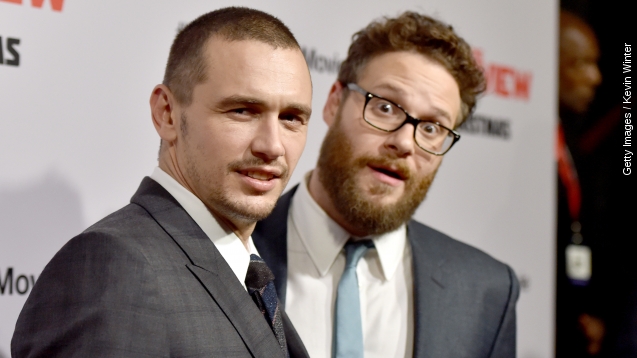 SMS
Seth Rogen Is More Saint Than Stoner ... Maybe
By Cody LaGrow
By Cody LaGrow
October 19, 2015
Seth Rogen threw a bar mitzvah for James Franco, but the celebration was about more than Franco becoming a man.
SHOW TRANSCRIPT

They're the funny friends that always seem to be stirring the pot together. This weekend was no different for James Franco and Seth Rogen — who traded in toking up for the Torah.

"Does this mean that you now have to act like a responsible adult?" asked ABC News' Nick Watt.

"I think that's what it means, yeah. So my days of childhood are over," Franco said.

Franco officially became a man. Miley proved again that she was a woman. And Rogen and his wife reminded us why they're the best.

Rogen's Hilarity for Charity event is meant to inspire change and raise awareness about Alzheimer's disease. And yes, Rogen spends a great deal of time making us laugh but has also spent years making us think.

"Unlike any of the other top ten causes of death in America, there is no way to prevent, cure or even slow the progression of Alzheimer's disease. Another thing I didn't realize was the shame and stigma associated with the disease," he said.

Rogen testified before Congress in 2014 and disliked the lack of funding for the sixth-leading cause of death in America — a theme that continued on NBC's "Today."

"It's completely out of whack. And for whatever reason, it's not something they care about. It's not a very glamorous cause when I'm your spokesman. That is apparent," Rogen said.

Rogen even surprised a Vermont fraternity that raised more than $30,000 for its own Hilarity for Charity event.

"They raised like a brand-new Prius more than the others," Rogen said, jokingly.

#FrancosBarMitzvah raised more than $2.5 million for Alzheimer's this weekend.

So while the event could allow us to focus on Zac Efron giving new meaning to the term "babe wrapped in swaddling cloth," let's not lose sight that Alzheimer's kills more people than breast and prostate cancers combined.

It's not a laughing matter for Rogen, but he's doing what he knows best to better the lives of all affected.

"I dream of the day my charity is no longer necessary and I can go back to being the lazy, self-involved man-child I was supposed to be," Rogen said.