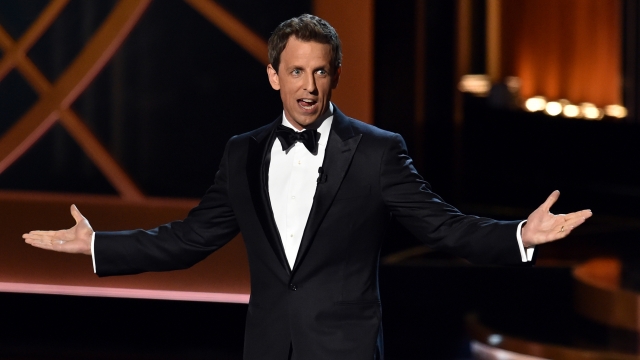 All the late-night show hosts love turning to Donald Trump for material.

But Seth Meyers, host of "Late Night" on NBC, has apparently decided he's had enough of the presumptive Republican presidential candidate.

After Trump took away The Washington Post's press credentials, Meyers decided to ban him from his program.

"Either rescind your Washington Post ban, or you're not allowed to appear on a show you have no interest in appearing on," Meyers said.

Trump snapped back saying he never wanted to be on the show anyway, saying in a statement, "I only like doing shows with good ratings."

Meyers and Trump actually have a not-so-friendly relationship that goes all the way back to the 2011 White House Correspondents' Dinner.

"Donald Trump said recently he has 'a great relationship with the blacks.' But unless the blacks are a family of white people, I bet he's mistaken," Meyers said.

Meyers lobbed several jokes at an unsmiling Trump after President Obama had already hurled a few of his own. Trump later called Meyers' performance "nasty" and "out of order."

A New York Times article suggests Trump's public humiliation that night further motivated him to run for president instead of deterring him.

Which basically ensured that Meyers and the other late night hosts would have material for months.

"When it comes to bigotry, Trump keeps upping his game. He's like if Joseph McCarthy was exposed to gamma radiation but became a racist, orange Hulk with tiny hands," Meyers said.