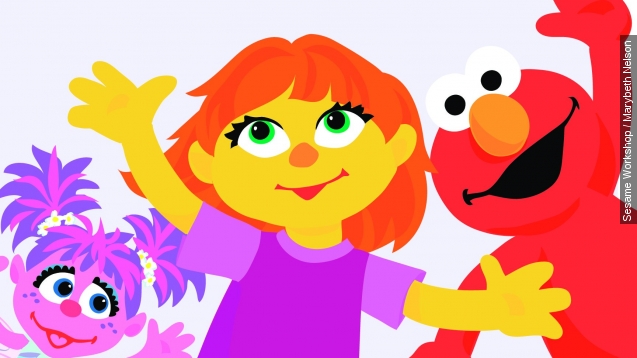 SMS
'Sesame Street' Adds Julia, Its First Character With Autism
By Matt Moreno
By Matt Moreno
October 22, 2015
Julia is a part of the "Sesame Street and Autism: See Amazing in All Children" campaign aimed at changing stigmas about autism.
SHOW TRANSCRIPT

For 45 seasons and counting, "Sesame Street" has been an integral part of teaching little kids about the world around them.

And that's continuing with the addition of the show's newest member — Julia, the first character with autism.

Julia was part of the "Sesame Street and Autism: See Amazing in All Children" rollout. The campaign aims to break the stigma of autism and help kids find common ground despite the potential barriers in communication.

Jeanette Betancourt, senior vice president of community and family engagement at Sesame Workshop, told People, "Children with autism are five times more likely to get bullied. And with one in 68 children having autism, that's a lot of bullying. Our goal is to bring forth what all children share in common, not their differences."

Autism spectrum disorders affect brain development in children, mostly causing difficulties in verbal and nonverbal communication throughout their lives. Boys are up to five times more likely than girls to be diagnosed with autism. (Video via The National Autistic Society)

"Sesame Street" has used its furry friends to tackle tough issues before. In 2002, the show added Kami, who was HIV-positive. (Video via UNICEF)

To read more about Julia and autism, head to the Sesame Workshop website.