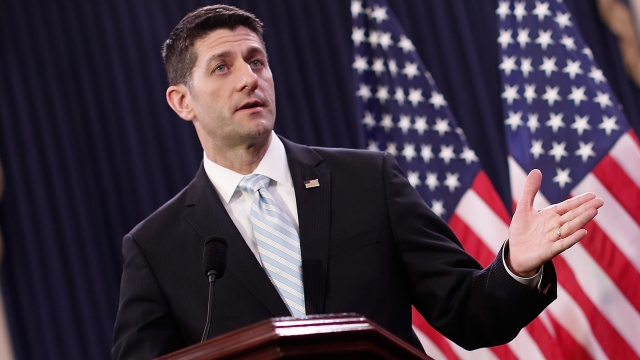 SMS
Seriously, Paul Ryan Doesn't Want To Run For President This Year
By Eugene Daniels
By Eugene Daniels
April 12, 2016
Ryan has tried to make it clear he's not running for president this year, but the idea of a Trump nomination has made it hard for some to accept that.
SHOW TRANSCRIPT

House Speaker Paul Ryan is still absolutely not running for president, and he's devoted an entire press conference to making sure everyone's up to date on this.

"I really believe if you want to be president, you should run for president. And when we select a nominee, we should be selecting someone who actually ran for the job," Ryan said during a recent press conference.

Ryan reiterated Tuesday he's focused on his role as speaker, which incidentally is another job he said he wasn't running for but was eventually politically strong-armed into taking.

He called the comparison "apples and oranges," and his aides told Politico there weren't any other options for speaker while there were more than a dozen candidates who ran for the GOP nomination this year.

For his supporters, Ryan represents a strong, establishment-approved alternative to the current GOP candidates, someone who could rally support at a contested convention and give the GOP a better shot at the White House.

But based on polling, that might not work out that well for Ryan. A recent poll found Ryan would lose to both Hillary Clinton and Bernie Sanders in a general election matchup.

And more importantly, it's unlikely Ryan wants to be nominated by seemingly circumventing the will of millions of caucus and primary participants who have cast their votes for the current selection of 2016 GOP nominees.