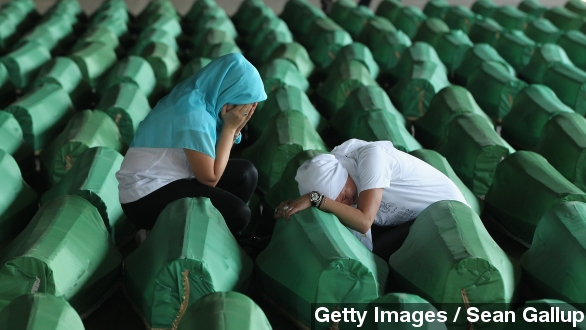 By Jake Godin
March 18, 2015
The 1995 massacre involved the killing of 1,000 Muslims in a warehouse on the outskirts of Srebrenica.
SHOW TRANSCRIPT

It's been almost two decades since thousands of Bosniaks were killed by Bosnian Serbs in the July 1995 Srebrenica massacre. On Wednesday, Serbia arrested seven men accused of taking part in the genocide.

So far, little is known about the seven. According to the BBC, they allegedly had direct involvement in the killing of 1,000 Muslims in a warehouse on the outskirts of Srebrenica. Bloomberg reports they were former members of a special Bosnian-Serb police unit.

"They brought 8,000 men, they believe, to this warehouse, where they tortured them, they starved them and then they eventually killed them. This was a dark moment in European history," CBC reports.

The Srebrenica massacre took place near the end of the Bosnian War, which lasted between 1992 and 1995, and it is considered Europe's worst modern massacre. (Video via International Criminal Tribunal for the former Yugoslavia)

During the war, Srebrenica, a primarily Muslim town, was surrounded by Serb-controlled territory. It was eventually attacked with the men and boys being separated out, killed and then buried in mass graves. (Video via NRK)

Radovan Karadžić, the former Bosnian Serb president, was arrested in Serbia and sent to The Hague in 2008 to be tried for war crimes relating to the siege on Bosnia's capital as well as ordering the Srebrenica massacre.

Then in 2011, Serbia arrested Ratko Mladić, a former Bosnian Serb military leader, and sent him to The Hague as well. He is also being tried at the International Criminal Court for war crimes.

In 2013 Serbia's President Tomislav Nikolic publically apologized for the Srebrenica massacre on Bosnian TV, though he stopped short of calling it a genocide.

More recently in December, Serbia and Bosnia arrested 15 Bosnian Serbs suspected of abducting 20 passengers from a train and killing them.

Still, many Serbian nationalists have protested the arrest of Mladić and Karadžić, seeing them as war heroes rather than war criminals. (Video via Balkan Investigative Reporting Network)

The fact that Serbia has sought out their arrests is in part thought to be due to its bid to join the European Union, which stipulates the country cooperate with the ICC.