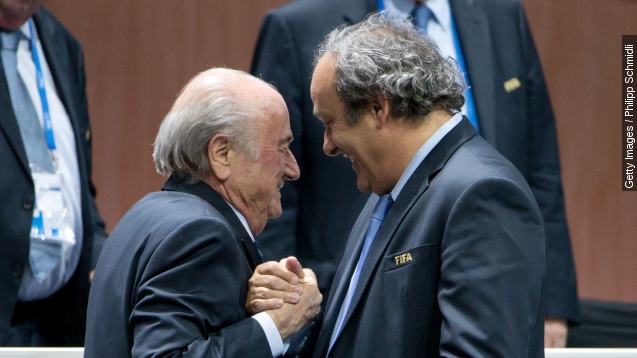 Blatter is appearing before the FIFA Ethics Committee on Thursday, where he's expected to answer questions about a nearly $2 million payment made to UEFA president Michel Platini in 2011. Platini is also currently suspended from FIFA. (Video via Sky News)

Both Blatter and Platini have been critical of the ethics committee leading up to Thursday and Friday's hearings.

Blatter recently sent a letter to all 209 national football associations maintaining his innocence, calling the committee "the Inquistion."

As the BBC explains, the term "Spanish Inquisition" is commonly used to describe "being asked questions which those facing them do not feel they need to answer."

But at least Blatter will be in attendance at his meeting. Platini says he's planning to boycott his Friday meeting altogether. (Video via CNN)

Platini will be skipping the meeting because he said he feels the committee has already made up its mind.

A statement on Platini's behalf said, "By this decision Michel Platini means to express his deepest indignation with a process he regards as solely political and intended to prevent him from standing for the FIFA presidency." (Video via BBC)

Reports say Blatter and Platini could both receive lifetime bans from the committee. A verdict could be announced as early as the beginning of next week.