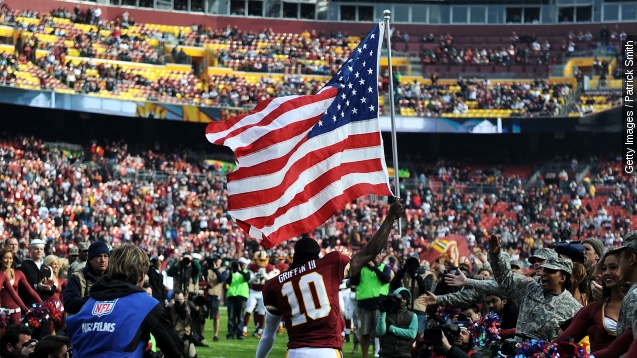 Arizona Sens. John McCain and Jeff Flake have issued a scathing report revealing the Department of Defense paid millions of dollars for displays of patriotism before and during sporting events to boost military recruitment.

Since 2012, the DOD has spent $10.4 million on advertising contracts with the five major sports leagues and NASCAR. Most of those agreements involved what the report calls "paid patriotism."

The report criticized the DOD for deceiving fans, finding "the tactics used by the military services questionable and the benefit to taxpayers undefined." And it's left fans feeling like they've been duped.

"You've got teams paying for something or accepting money for something everyone thought they were doing for free. Then you have the Defense Department spending taxpayer dollars on something that everyone assumed was free. And in many cases you have this all happening in taxpayer-funded stadiums," Rick Klein said.

Over the past four years, the biggest recipient of DOD funds was the Atlanta Falcons. The team has received $879,000 since 2012 for their on-field tributes, but they're probably not going to get a chance to spend that money.

NFL Commissioner Roger Goodell wrote a letter to investigators saying, "If we find that inappropriate payments were made they will be refunded in full."

And if you're looking for an exact figure on how much NFL teams might have to give back, so are the investigators.

The report said the DOD "cannot accurately account for how many contracts it has awarded or how much has been spent." It also found the department failed to account for more than $3 million spent on paid patriotism and over a third of its contracts that investigators found.

But if McCain and Flake have their way, they'll close the book on paid patriotism. A proposed amendment to the National Defense Authorization Act would outlaw taxpayer-funded salutes to the troops.