Senate Will Have 8 Hours To Make An NSA Decision 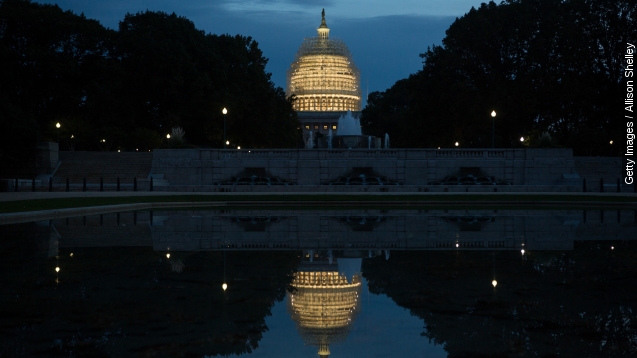 SMS
Senate Will Have 8 Hours To Make An NSA Decision
By Cliff Judy
By Cliff Judy
May 23, 2015
A weary upper chamber still proved it had the energy early Saturday to block bills to both end NSA's bulk data collection and to extend it.
SHOW TRANSCRIPT

"On this vote, the yeas are 57, the nays are 42. Three-fifths of the senators duly chosen and sworn not having voted in the affirmative, the motion is not agreed to," said the Senate's presiding officer. (Video via C-SPAN)

And with that, the future of NSA bulk data collection is as murky as it's been since Edward Snowden first exposed it.

On Monday, June 1, the Patriot Act will expire. And along with it, the controversial Section 215 the National Security Agency uses to justify collecting the phone records of millions of Americans.

And while the bulk collection-ending House resolution called the USA Freedom Act passed that chamber with an overwhelming majority, the Senate's "no" vote just after midnight Saturday opened the door for just the opposite.

"I would urge a 'yes' vote on the two-month extension," said Senate Majority Leader Mitch McConnell (R-Kentucky). (Video via C-SPAN)

While Senate Majority Leader Mitch McConnell had managed to hold the lines against the USA Freedom Act, his Patriot Act extension also failed less than half an hour later.

House members left Washington, D.C. a couple of days ago and refuse to say whether they'll return before the Patriot Act expires. The Senate comes back on May 31 at 4:00 p.m. with only eight hours to do something before the deadline.

So the first option to pass the USA Freedom Act, for now, is done. The second option to extend the Patriot Act is done — the Senate rejected even a two-day extension that could've put some pressure on the House. The next option? No one's quite sure.

McConnell basically tried to strong-arm his weary upper-house colleagues who were keen on leaving town for the Memorial Day break. He focused the Senate's last day before the recess on passing fast-track trade legislation for President Obama and hoped procrastination and exhaustion would work in his favor.

But it didn't, leading some outlets like Politico to go so far as to label McConnell's strategy a "backfire" with no clear way to move forward. Perhaps just as telling, McConnell left the Hill early Saturday without stumping to reporters.

"In the end, the problem isn’t the House. It’s right in front of McConnell in the Senate. And he’s betting the eight days and some time away from Washington is the solution."

One thing's clear. While no one can agree just now on how to move forward, lawmakers just as badly don't want to be seen as letting a national security policy lapse with no policy in place for the future.

"We've got a week to discuss it," said Senator McConnell. "We'll have one day to do it. So we better be ready."