Senate Agrees Climate Change Is Happening, Just Not On Why 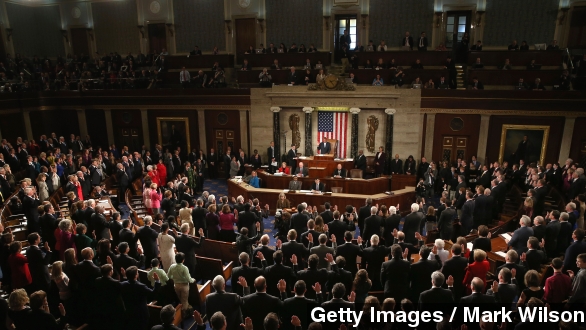 Sen. Cory Gardner said: "On this vote the yeas are 98. The nays are one. Under the previous order requiring 60 votes for the adoption of this amendment, the amendment is agreed to."

That was Wednesday afternoon, when the Senate overwhelmingly voted in favor of an amendment affirming that climate change is real and is happening now.

Even Oklahoma Sen. James Inhofe, one of the Senate's most outspoken climate change skeptics, and, coincidentally, chairman of the Senate subcommittee on Climate and Public Works, voted for the amendment. (Video via Office of Sen. Jim Inhofe)

That's the same Sen. Inhofe who called climate change "the greatest hoax" in his book "The Greatest Hoax: How Global Warming Threatens Our Future."

But support for this new amendment aside, Inhofe and other Republicans stopped short of supporting another amendment, from Hawaii Sen. Brian Schatz, that stipulated human activities significantly contributed to climate change. That vote failed 50-49.

The votes came the day after President Obama reaffirmed his support for action against climate change in his State of the Union address and called on legislators to do the same. (Video via The White House)

The sticking point on climate change action in Congress continues to be whether humans are contributing to the problem through greenhouse gas emissions.

The president pointed to the prominent scientific bodies that say we are contributing to climate change. Opponents have called that into question despite multiple studies that have found a significant scientific consensus on the issue.

Now even the Pope is expected to lend his support to the fight against global warming through an encyclical, calling on the world's Catholics to act to prevent further climate change. (Video via Rappler)

But many skeptical politicians argue scientists and other politicians have played up the dangers of climate change and that action on the issue isn't worth the economic risks it would pose to fossil fuel producers. (Video via PBS)

But while many members of Congress who are skeptical of human-driven climate change are Republican, the party isn't exactly united on the issue.

Despite the lack of agreement, a number of senators said Wednesday's vote was still a positive sign moving forward.