If Clinton Becomes President, This Senator Plans To Impeach Her 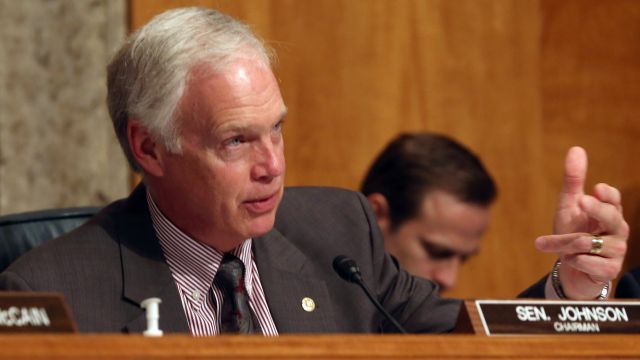 She hasn't been elected president, but one U.S. Senator says he's ready to impeach Hillary Clinton.

In an interview with a Wisconsin newspaper, Sen. Ron Johnson said Clinton's email scandal qualifies as a "high crime or misdemeanor," meaning she could be impeached.

The U.S. Constitution states, "The President, Vice President and all Civil Officers of the United States, shall be removed from Office on Impeachment for, and Conviction of, Treason, Bribery, or other high Crimes and Misdemeanors."

Talk about impeaching Clinton started more than a year before Election Day 2016, thanks to an Alabama congressman.

"But there's no question that she mishandled classified documents, and she did so intentionally. And that is a criminal offense in the United States code," Rep. Mo Brooks said on MSNBC.

The FBI disagreed with Rep. Mo Brooks' assessment of Clinton's use of a private email server. FBI Director James Comey said Clinton was "extremely careless" with classified information, but he did not recommend any charges.

The FBI's closed investigation recently made headlines again after Comey sent a letter to Congress saying the bureau found new emails that could be pertinent to the case.

For Clinton to be impeached, she would need to be formally charged by the House of Representatives. Then the Senate would hold an impeachment trial, and if she were convicted, she would be removed from office.

The only two presidents to be impeached in the history of the United States are Andrew Johnson and Bill Clinton. Both were acquitted of wrongdoing.