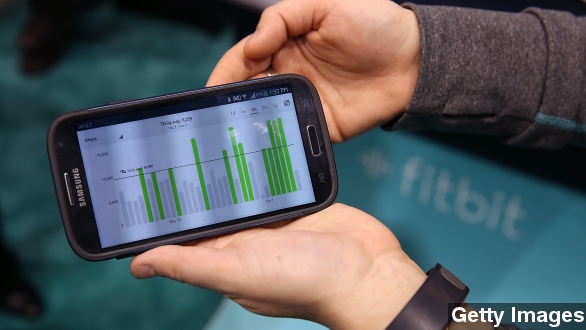 More and more people are using fitness tracking apps and bracelets to make sure they're getting enough exercise, but one lawmaker is calling the technology a threat to privacy.

Waving a Fitbit bracelet and standing in front of some joggers, Schumer said Sunday:

"These bracelets could also represent a true privacy nightmare."

Now, it's obvious fitness trackers collect user data. That's pretty much what they're for.

Wireless devices like the Fitbit Flex can track steps taken, distance traveled, calories burned and can even monitor sleep habits, allowing users to see hard data on their activity levels.

But in a statement, Schumer said, "There are currently no federal protections to prevent those developers from then selling that data to a third party without the wearer's consent."

Fitbit responded to the senator's comments by saying it's not part of the problem: "Fitbit does not sell user data. Our privacy policy prevents us from doing this."

Still, Schumer's point is that Fitbit could sell that data if it wanted to. We know other activity-monitoring apps do sell sensitive information about their users.

Earlier this year, the FTC released a report studying 12 mobile and fitness apps that sold data like location, activity level, names and email addresses and even searches for medical symptoms.

And it's not just fitness apps. The agency also recently settled a complaint against GoldenShores Technologies for secretly selling user data. The company's Brightest Flashlight app tracks location data for some reason.