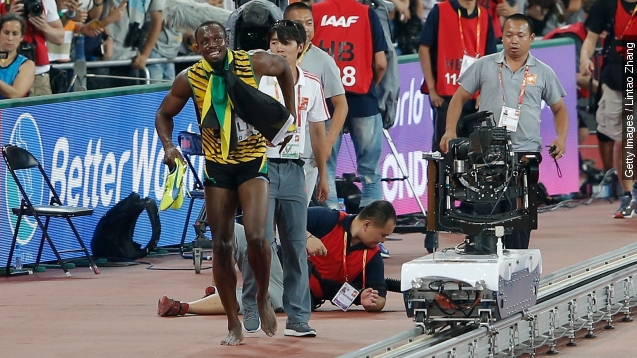 Sprinters are almost always at risk for leg injuries when they're on the track — just usually not from Segways.

Usain Bolt was taking a victory lap after winning his fourth consecutive 200-meter victory when a cameraman on a Segway hit a railing and lost control — barreling right into Bolt.

The accident took Bolt's legs out from under him and gave all of Jamaica, and especially that cameraman, a tense few seconds.

Bolt immediately got up with a bit of a limp but walked it off. He said he only suffered a cut on his leg.

Bolt doesn't want a major injury right now. Any setback could cost him a chance in Rio de Janeiro for the 2016 Summer Olympics.

Bolt pulled out of the Diamond League meetings in late June due to discomfort in his left leg.

But it looks like he's back to world-record form and ready to take center stage next summer where the only thing standing between him and a flurry of gold medals might be Segways.