Secretary Of Education Will Step Down; Who's The New Guy? 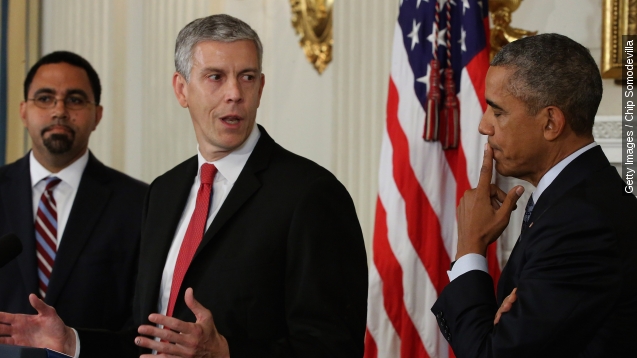 SMS
Secretary Of Education Will Step Down; Who's The New Guy?
By Samantha Crook
By Samantha Crook
October 2, 2015
Obama confirmed Arne Duncan will step down as U.S. secretary of education. John B. King Jr. will be taking over Duncan's responsibilities.
SHOW TRANSCRIPT

President Obama announced Friday that Education Secretary Arne Duncan will be stepping down.

John B. King Jr., Deputy Secretary of Education, will take over Duncan's responsibilities, and the two men have a lot in common.

In addition to their passion, they both share a connection to charter schools.

Duncan's praise of charter schools has been a more controversial aspect of his career in the department — along with advocating for Common Core standards. (Video via MSNBC)

King co-founded a charter school in Massachusetts in his 20s. And he served as a managing director of a public charter management organization. (Video via Uncommon Schools)

Like Duncan, King has a personal connection to urban education. He said New York City public school teachers played a pivotal role in his success, and he became a teacher himself. (Video via The Oneida Daily Dispatch)

King has a particular interest in narrowing the achievement gap and improving access to education for students of color. (Video via WIVB)

King was the first African-American and first person of Puerto Rican descent to serve as New York state education commissioner. (Video via WCBS)

"John was one of those kids [who] probably shouldn't be in a room like this, if you sort of look at the stereotypes and not the easiest time growing up. ... So many times, I think, we in society write off kids [who] look like John and come from places like John, and to see what he can accomplish, I think, that's what drives all of us," Duncan said.